This article is using {{Card template}}.
See Help:Style guide/Card for how to edit this kind of article.
Edit this article
Mortal Strike
804 • EX1_408
Regular 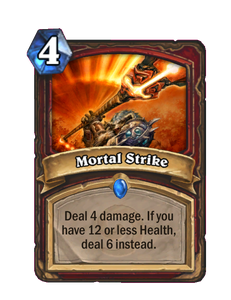 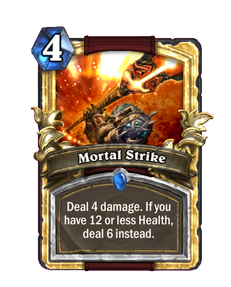 "If you only use one ability, use Mortal Strike." - The Warrior Code, Line 6 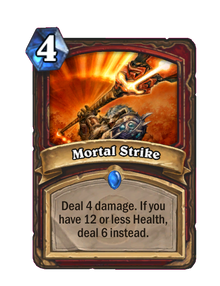 Mortal Strike is a rare warrior spell card, inducted into the Legacy set, formerly from the Classic set. 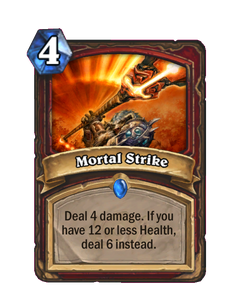 This is one of the few abilities a warrior has in his arsenal that can deal significant direct damage to either a minion or opposing hero without having to take damage in return. While weaker than other classes' cards like Fireball, this ability can be very useful in warrior decks.

The 4 damage during the majority of the game is enough to clear most taunt minions, especially when used in combination with Slam, Whirlwind, Heroic Strike or Execute. The 2 point damage bump when health is low, as well as being able to hit any target instead of just minions, make it worth the extra mana cost over similar spells such as Shadow Bolt.

Mortal Strike can also be used as a game finisher when you need that last few points of damage to finish off the opposing hero.

"If you only use one ability, use Mortal Strike." - The Warrior Code, Line 6

Mortal Strike is an Arms warrior melee attack from World of Warcraft. One of the most important and powerful attacks in the Arms warrior's arsenal, it deals a large amount of damage and applies a healing debuff, reducing any healing received by the target for a short duration. It also generates rage to fuel the warrior's other attacks, making regular use of the ability even more desirable.