This article is using {{Card template}}.
See Help:Style guide/Card for how to edit this kind of article.
Edit this article
Mortal Coil
1092 • EX1_302
Regular 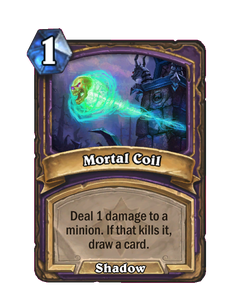 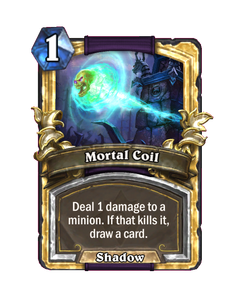 If your spells look like horrifying skulls, let's be honest, you should get to draw some cards. 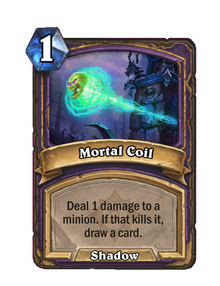 Mortal Coil is a warlock spell card, inducted into the Legacy set, formerly from the Basic set. 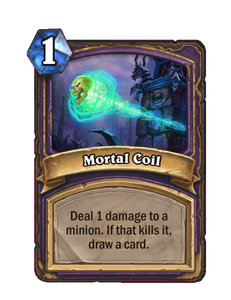 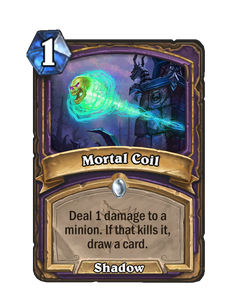 Regular and golden Mortal Coil are uncraftable and cannot be crafted or disenchanted.

Two copies of regular Mortal Coil are obtained for raising warlock to level 2.

Mortal Coil (Core) is uncraftable and cannot be crafted or disenchanted.

In addition to the obvious removal potential, it is important to note that this spell can be cast at your own minion in order to draw a card (particularly useful in decks that are designed to draw as many cards as possible). It can also be played as a last ditch effort to draw a card that could save you from losing (such as a taunt) when at low life.

This card is best played on targets with 1 Health, but can also be useful for removing Divine Shield or simply dealing damage where necessary.

It is very helpful to increase spell damage for Mortal Coil in particular, as it will allow it to take out medium sized minions such as Shattered Sun Cleric and draw a card for a mere 1 mana.

Mortal Coil is a talented warlock spell from World of Warcraft. It causes the target to run in horror for 3 seconds, and restores a portion of the warlock's health. It is very useful as a form of crowd control, as well as a regular method of maintaining health levels.