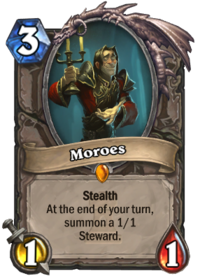 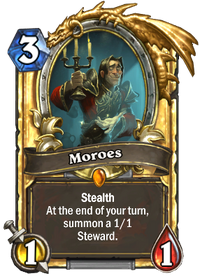 Stealth
At the end of your turn, summon a 1/1 Steward.
Flavor text

Moroes runs an army of stewards, but still ends up inflating the balloons himself.

Moroes is a legendary neutral minion card, from the One Night in Karazhan set.

The character Moroes also serves as narrator for most of the One Night in Karazhan adventure.

Regular Moroes is obtained by completing The Parlor, the first wing of One Night in Karazhan.

As a Wild format card, both regular and golden versions of Moroes can also be crafted for the following amounts: 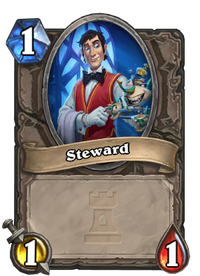 Although his effect and poor stats don't look like much, Moroes essentially provides a free Reinforce every turn, including the turn he's summoned. This allows him to contribute a large amount of damage over time, similar to a Dreadsteed. Unlike Dreadsteed however, Moroes can be easily removed by any AoE damage. He will most likely require buffs like Power Word: Shield in order to stay alive.

He's powerful in a Paladin deck in combination with Steward of Darkshire, who will grant a Divine Shield to both Moroes and the Steward spawned that turn, making them difficult for your opponent to remove.

He works well in a The Caverns Below deck, where he becomes hard to remove while spawning powerful minions.

Although the Stewards are quite weak, they become a much bigger threat when accompanied by Stormwind Champions and/or by Raid Leader, or any other cards that improve others minions' attack or health. 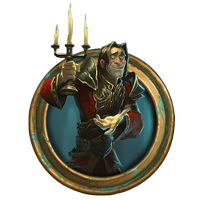 Medivh's ever-capable majordomo, Moroes is the caretaker of Karazhan, and welcomes the player to the party when they arrive. He accompanies the player as they tackle the deranged enchantments of the first floor, offering choice words of advice. For dialogue, see individual boss pages, e.g., Silverware Golem (boss)#Dialogue.

Step into The Parlor[]

"Master Medivh has some, ah . . . business in the rooms above, but I’m sure he’ll be delighted to show you around once it is complete. Please feel free to wait for him outside."

"Oh, you want to come inside? I suppose I can delay all the extremely important preparations that I was overseeing so I can play at being your tour guide."

"Ahem, where are my manners? Allow me to introduce myself. I am Moroes, steward of Karazhan. Karazhan is known to one and all as the most magnificently magical dwelling on Azeroth—indeed, the entire edifice is positively crackling with arcane energies! The Master seems to think that this is the ideal location for the greatest party the world has ever seen. A “real rager,” I believe he called it."

"Ordinarily we’d welcome guests to relax in the dining hall with a nice spot of tea. Alas, they’re still decorating for the party, so we’ll just cut through the kitchens here. Our kitchens are almost completely magically automated, and we have dishes and silverware to serve hundreds of guests. Most of our tableware are priceless antiques, and a few were even gifts from the King himself! And voila—the kitchens!"

"Oh my! The tableware is singing. And dancing. Musical tableware isn’t on the approved decorations list, but the song is catchy, don’t you think? Medivh has been enchanting everything in sight to make sure that his party leaves a lasting impression, so you never know quite what will happen next. It is odd though . . . they’re normally so well behaved when the Master is home. Well, let’s move on, and please don’t feed the forks. It’s not dinner tine yet, ha ha. Ha. Um, right. This way, please."

"As we stroll through this hallway, you’ll notice our collection of paintings from some of the greatest artists to have ever lived, and even a few that haven’t been born yet! I really don’t know how the Master manages it. No touching, of course."

"Yes, they’re magnificent, aren’t they? Oh, this one with the drape over it? It isn’t a painting at all; it’s a mirror. A magic mirror. Medivh animated it with an experimental enchantment. Oh, perhaps a tad unruly at first, but it’s quite friendly now. Complimentary, even! Most of the time. And here we are, at the game room."

"There’s only one game in the game room, and that game is chess. You see, Medivh is a dedicated aficionado of chess. The masterfully carved pieces, the intricate strategies, the meeting of mind and will! The Master just loves it. Yes, chess is the game for this game room. That could be because the pieces are so large that there’s no room for other games in here. It could also be that the pieces get offended when other games are introduced and, ah, tend to violently destroy them when no one is watching. Well, whatever the reason, chess it is!"

"Is it dangerous? While this chess set is animated by immensely powerful magics and sometimes exhibits a mind of its own, I assure you that it’s perfectly safe. Unless you happen to be backgammon, ha ha!"

"Well, that was all very diverting. It, ah, seems that the master is still indisposed. How strange. . . . Well, I suppose we’ll continue with a tour of the opera house while we’re waiting."[1]

"I, Moroes, steward of Karazhan, have already shown you around the Parlor. Now, if you’ll pardon the phrase, I’ll throw back the curtains on one of Karazhan’s most luxurious features: Medivh’s private opera house. The stage manager, Barnes, books the very best singers and actors from around the world, and the performances are sure to put you on the edge of your seat! Barnes is quite the character, but he should be able to keep you busy while I attend to some additional party-related matters. I’ll return shortly."

"I, Moroes, have returned. My, my, you all look so glad to see me! Why are you sweating? Actually, don’t answer that question; I don’t want to know. Well then, since I clearly have nothing better to be doing while the Master is gone, I suppose we can visit the Menagerie next."[2]

"You will find our next stop to be truly thrilling. Karazhan plays proud host to the world’s only privately run arcane zoo, featuring exotic—and dangerous—creatures from all manner of places, times, and dimensions. The Master spared no expense."

"Right through this archway, please. Ah, here we are: The Menagerie! I will now allow the Curator to show you a few of our special exhibits while I attend to some matters of importance. Please be nice to the Curator. And please don’t touch anything! There will be ample opportunity for you to make a mess at the celebration later tonight."

"Oh, your tour was cut short? You say the Curator was acting strangely? Well, the Master is clearly too occupied to renew its enchantments right now. I’m quite sure it will be fine, though I do admit that the Menagerie is not to my taste. I’ve often warned the Master against maintaining extra-dimensional spaces and extremely large, voracious creatures. He claims that they’re important to his research and that the Curator has everything totally under control. Hrmph. Under control indeed! I say that Imps, ah, find a way."

"Well, we’re all the way up here, so I don’t see the harm in giving you a quick peek at the Spire. It will be a nice treat for you, since party guests will not be allowed to enter it tonight."[3]

Sneaking into the Spire[]

"Shhhh! You could be as boisterous as you liked in the Menagerie, but now we’re about to enter the Spire. There really shouldn’t be guests up here, so we must keep it down. The top floors of Karazhan serve as Medivh’s chambers, housing an extensive private library of the rarest magical tomes, an advanced arcane laboratory, and of course, his private living quarters. Now, let’s have a quick look around, shall we?"

"Don’t let that door slam! I feel just like a young man of fifty again, sneaking about like this. Mind you, we should be able to stroll about the library and peruse the tomes at our leisure, but the ghost of Medivh’s father has taken up residence. Nielas isn’t so bad when Medivh is around to keep him sensible, but when the Master is out? Pff. Let us simply say that death has not improved his disposition. In fact, he turns into one the ghastliest geists I’ve ever had the displeasure to meet. When the singers were warming up earlier, he kept banging his staff on the floor of the library and yelling at us to “keep down that racket.” He once told me to get off of his lawn. Me, Moroes! And Karazhan doesn’t even have a lawn!"

"Uh oh, I think I hear him drifting this way! Quickly, into the laboratory!"

"Oh, splendid! Netherspite is away preparing the arrival portals for tonight’s guests. Netherspite is Medivh’s laboratory assistant and portal master. He also happens to be a dragon, and very serious about his experiments. In addition to his considerable knowledge of all things arcane, Medivh is something of a master of portal arcanology. I’m assuming that arcanology is a word. Regardless, from this very chamber, you can access realms and regions beyond imagination! The possibilities are endless, but we really shouldn’t touch anything. Especially that! Hands off! You do want to be able to enjoy the party later with all of your limbs and senses intact, yes? I think it’s time we returned to the Parlor now."

"Well, that was exhilarating! And we’ve gotten away with it scot-free! I’m sure that Master Medivh will be arriving at any moment to get this party started! Despite your inconveniently early arrival, you’ve all been such good sports about everything that I’ve grown a bit attached. Alas, I really must go to make some additional preparations, but I trust you can occupy yourselves before the celebration commences? Wonderful, I very much look forward to partying hard with you all!"[4]

Moroes is Karazhan's steward and can be found tending to guests in the Banquet Hall in Karazhan. Along with four special invited patrons, Moroes fights any uninvited guests to the death. Moroes is the second boss and the first mandatory boss found in this raid instance, and his defeat allows access to the Opera Event.

His quests in Warlords of Draenor reveal that he is aware of his undead state and of being mysteriously revived over and over. If he had his preference, he would like to die permanently.

Moroes was described as Medivh's castellan or personal house servant. He was an oddly thin man, too thin. It made Khadgar think Medivh mutated animals to serve him. He was also ghostly in appearance, and wore horse blinders over his eyes in order to escape the wandering visions that plagued Medivh's tower. He described to Khadgar (who had traveled from Dalaran to serve as Medivh's apprentice) how he had seen a vision of himself breaking one of Cook's crystal dishes and — despite trying to avoid doing so — ended up shattering it anyway; he wore the blinders until the day he died. When Khadgar and Garona revealed the truth about Medivh, the apprentice told Moroes to take Cook and leave the tower. He gave them a whistle to summon a gryphon but did not leave as he had nowhere to go. He was killed by Medivh, who was in the final stages of madness, and is now buried beside both his master and Cook outside of Karazhan. It seemed that Moroes wasn't surprised that he was murdered by Medivh, according to The Last Guardian, it said: His eyes were wide and open, but his face was surprisingly composed. Not even death seemed to surprise the castellan.