"The power of the elements can only be mastered by the most dedicated of wills. There is one shaman whose abilities surpass all others'. Hear now his words of wisdom!" - Thrall
[Unintelligible murloc noises] - Morgl[1] 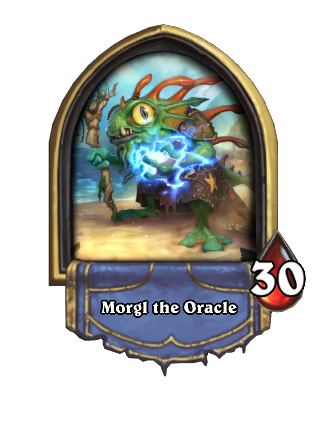 Morgl the Oracle is a hero skin for the shaman class.

Morgl the Oracle is a murloc shaman, and member of the Earthen Ring. The World Shaman Thrall describes Morgl as a shaman "whose abilities surpass all others", suggesting he is truly powerful.[1] Morgl's opening remark "Time for a lesson, young one!" suggests he is an elder among his people, if not among the other races of Azeroth. Many of the other murlocs pay tribute to the great oracle.[2]

Morgl's introductory cinematic depicts a mighty storm ravaging a murloc village: lightning flashing in the sky, fire raging on the ground, mighty waves rising above the huts, and an army of huge tornados closing in. This might depict a cataclysm from which Morgl rescued his people by calming the elements, or perhaps the fate of a murloc tribe that incurred the oracle's wrath.

Morgl sometimes appears in the shaman Order Hall in World of Warcraft, located in the Maelstrom. The oracle is reluctantly drawn to Hearthstone by the recruitment of new friends.

Sir Finley Mrrgglton, renowned gentle-murloc explorer, has been scouring the jungles and coastlines of Azeroth in search of mannered murlocs ready to take up the mantle of heroism and reject the savagery of their fishy-folk. You can aid his cause with a little help from your friends!

While most murlocs are more likely to have visitors for lunch than they are to invite them over for tea, Morgl the Oracle has wisdom, wit, and the wherewithal to fight the good fight. His language skills aren’t quite up to Finley’s level, but his command of the elements is unmatched! He’s got the attitude, and he’s got the skills—now he just needs a little convincing!

Just invite a friend to join you for some Hearthstone fun! After your first recruit has accumulated a total of 20 levels across all of their Heroes, Morgl will follow your friend’s example to join your collection as a new Shaman Hero![3]

Morgl is original to Hearthstone.[4] Introduced in July 2016, he was first mentioned in the flavor text for Puddlestomper from the Goblins vs Gnomes set from December 2014, preceding his appearance in Hearthstone by more than 19 months. Morgl himself was first revealed to players through the World of Warcraft: Legion beta test in the first half of 2016, although this was available only to a limited pool of testers. Like Sir Finley Mrrgglton's NPC, this minor WoW character serves as a tribute to his main appearance in Hearthstone.

Morgl the Oracle is currently available for obtaining. 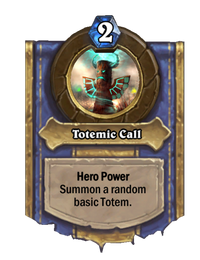 Once unlocked and selected for use, Morgl the Oracle replaces Thrall whenever the player uses a Shaman deck, as well as:

When viewed in the Collection, Morgl the Oracle has the following flavor text: