This article is using {{Card template}}.
See Help:Style guide/Card for how to edit this kind of article.
Edit this article
Mordresh Fire Eye
63064 • BAR_547
Regular 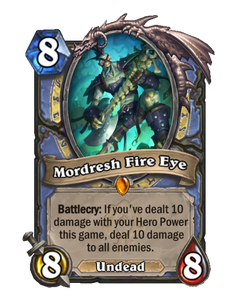 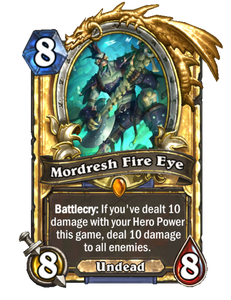 You're not hardcore unless you died hardcore. 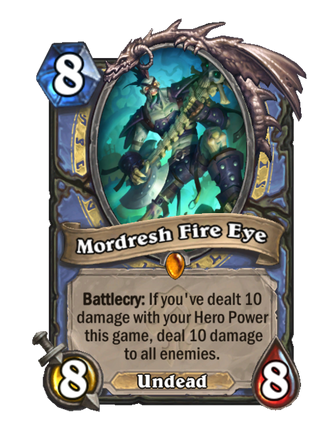 Mordresh Fire Eye is a legendary mage minion card, from the Forged in the Barrens set.

Mordresh is your biggest payoff card for running Hero Power support in Forged in the Barrens. Given that his condition is met, his Battlecry will more than likely clear your opponent's board, effectively

Pyroblast their hero, and leave behind a threatening 8/8 body afterwards.

In Standard play, your main tools for enabling Mordresh are

Reckless Apprentice. The former effectively halves the number of times you need to use your Hero Power, and the latter can rack up damage quickly with a single card (assuming your opponent has a board). Used in tandem, these cards can very easily meet Mordresh's requirement.

Coldarra Drake are also options, albeit less reliable ones.

In Wild, Mordresh can be used with

Genn Greymane in Even Mage, and he is the main power play in some versions of this deck (note that

Baku the Mooneater have the full repertoire of support cards at their disposal, including

Wildfire, which also has a powerful effect for a similar condition. (While this archetype is fun, know that Wild's high power level means that these decks are nowhere near a match for top-tier decks in that format.)

Death Speaker Blackthorn was able to rekindle the flames of Mordresh Fire Eye's soul, returning him to undeath. As a former shaman, Mordresh has exerted his twisted control over the elements. He burns and scorches all those who threaten the Death Speaker's work.

"You're not hardcore Unless you live hardcore"