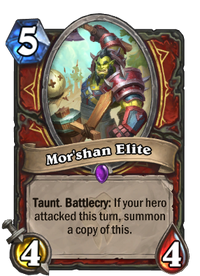 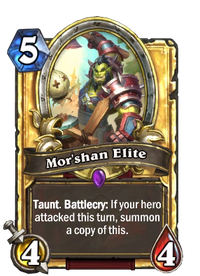 Taunt. Battlecry: If your hero attacked this turn, summon a copy of this.

Mor'shan Elite is an epic warrior minion card, from the Forged in the Barrens set.

Mor'shan Elite is a very stat-efficient play in decks that can reliably fulfill its condition on turn 5 or 6. It is an effective follow-up to an Outrider's Axe or Sword Eater played on turn 4, and can be useful in a midrange or control-style deck due to its Taunt.

Since it creates an exact copy of itself, Mor'shan Elite is also very potent with handbuff effects; notably, Bulk Up and Conditioning were both introduced in the same expansion, though playing these can hurt your early tempo. Feat of Strength is very potent with this card, if a bit slow and unreliable. Wild players can also use Into the Fray and/or Armagedillo.