This article is using {{Card template}}.
See Help:Style guide/Card for how to edit this kind of article.
Edit this article
Moorabi
43072 • ICC_289
Regular 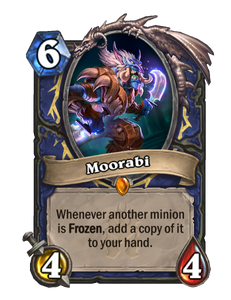 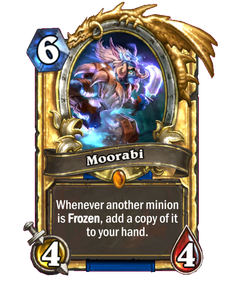 Dimensions: Full • 330 x 410px
Elite
Whenever another minion is Frozen, add a copy of it to your hand.
Flavor text

Most disturbing is how Moorabi covers all those frozen minions with flavored syrup. 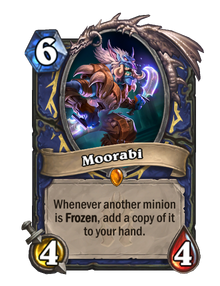 Moorabi is a legendary shaman minion card, from the Knights of the Frozen Throne set.

Moorabi is a powerful card under the right conditions. Although it is under-statted, as a 6 Mana 4/4 minion, its passive effect can be very powerful and essentially combines the effect of Convert or an instant Spirit Echo to any Freeze effect while it is in play. For the card to be worth playing value-wise, at least two cards need to be copied, and as opponents will try to kill Moorabi very quickly, you should aim to trigger Freeze effects on the turn this card is played. Moorabi should be a solid choice for Freeze Shaman style decks, to add additional card generation, and can likely be used to generate some interesting combos.

Can be combined with Hyldnir Frostrider to gain a copy of every friendly minion on the board, excluding another Moorabi. However, leaving your own minions frozen can favor poorly, so this combo should be used carefully.

In Arena, Moorabi is a weak card, as it's not reliable to draft enough Freeze effects for the card to be worth considering, and it's statline is very poor.

From the World of Warcraft Adventure Guide
The Drakkari sought to sacrifice Mam'toth for his powers, but instead the loa destroyed himself. Despite this act, Moorabi would not be denied his god-like powers. The high prophet drank of the loa's blood and will now stop at nothing to keep Zul'Drak firmly in troll hands.