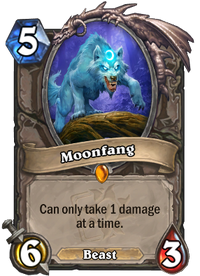 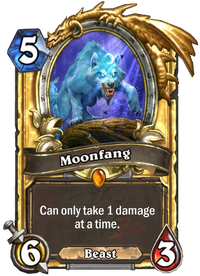 Can only take 1 damage at a time.
Flavor text

Moonforehead just didn't have the same ring to it.

Moonfang is a legendary neutral minion card, from the Darkmoon Races mini-set.

Moonfang can be obtained through Madness at the Darkmoon Faire card packs, through crafting, or as an Arena reward.

Health buffs are extremely effective on Moonfang, especially when coupled with Taunt. Druid is particularly good at this, with cards like Ironbark, Survival of the Fittest, and Mark of Nature to easily buff its health. If the opponent has large minions and no cards that can destroy Moonfang immediately, Moonfang can stall them for a long period of time.

Moonfang is a fairly low-impact card when played on 5, so it's a good target to cheat out of your deck. Druids can accomplish this with Guardian Animals or Strength in Numbers, while Paladins can use Duel! or Commencement.

Moonfang however is very weak to small damage sources, like Command the Illidari or Dark Skies, or even just a board of tokens. It's also susceptible to Silence and transform effects and non-damage hard removal, especially when already buffed. As the opponent, if you do not have instant destruction cards, try to kill Moonfang as quickly as possible to avoid its health from spiraling out of control, or try to kill the opponent quickly before they can give Moonfang buffs.

There are 2 achievements related to Moonfang.

Moonfang is a world boss located in the woods on western Darkmoon Island. She (and the rest of the Island) is only accessible while the Darkmoon Faire is active. Moonfang is a no tap mob, meaning all players of both factions that are on her aggro table are eligible for loot.

Her cubs grow into massive, slavering, black-furred killing machines... except for Moon Moon.