This article is using {{Card template}}.
See Help:Style guide/Card for how to edit this kind of article.
Edit this article
Molten Giant
1372 • EX1_620
Regular 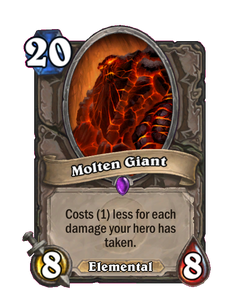 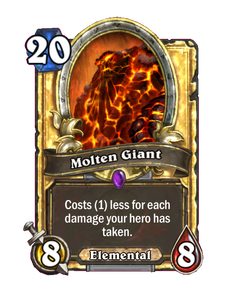 He gets terrible heartburn. BECAUSE HE IS FULL OF LAVA. 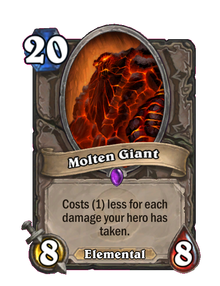 Molten Giant is an epic neutral minion card, inducted into the Legacy set, formerly from the Classic and Hall of Fame sets. 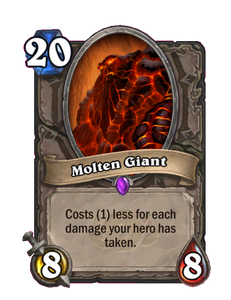 Molten giants are a type of giant that live in warm mountains and underground. Most live in the Molten Core. Small glowing yellow eyes peer out of a massive red stone skull. In fact, this creature's entire body is formed from chunks of red stone, even what appears to be a beard or mane. Its arms and legs are thick pillars of rock, and every inch is covered with molten veins. Molten giants are the brutal and cunning front-line defenders of Ragnaros' army.

Ragnaros pulled some of those giants from the heart of the Firelands to the Blackrock Mountain and the Molten Core. The Earthen Ring has all shamans forbidden to summon, control and direct those unpredictable and violent fire elementals. The use of such coercion could trigger an event similar to the Cataclysm, if the elements grow sufficiently angry. Garrosh Hellscream recently ordered his dark shamans to force Molten giants into battle.

Commentary: Moving Molten Giant to the Hall of Fame allows us to revert it to its original mana cost, giving players a chance to experiment with decks featuring Molten Giants in the Wild format.

Commentary: "Molten Giant is an interesting card, but it’s too easy for players to reduce its mana cost to 0. We’re increasing Molten Giant’s mana cost to 25 to increase the risks players must take to get a free Giant. The changes to Force of Nature and Arcane Golem will make dropping to low health somewhat less risky as well, which helped spur this change."