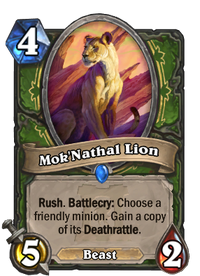 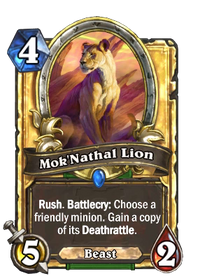 Rush. Battlecry: Choose a friendly minion. Gain a copy of its Deathrattle.

Never underestimate a lioness when her pride is on the line.

Mok'Nathal Lion is a rare hunter minion card, from the Ashes of Outland set.

Mok Nathal Lion not only copies a minions Deathrattle but it provides rush which guarantees to activate its Deathrattle alongside killing an enemy minion.

Targetting eggs like Serpent Egg, Nerubian Egg, Devilsaur Egg is essential as Eggs have 0 attack on its own and it can provide a good minion on its death.

You can use Feign Death, Play Dead will essentially trigger two Deathrattle, one of this and the other that has been copied.

In Arena, its Battlecry may not be used but its Rush is essential for minion trades.

The mok'nathal (also spelled Mok'Nathal or Mok'Nathal Clan) are half-ogre, half-orc hybrids. Most mok'nathal are part of a clan found in Outland, though it is nearly defunct. Rexxar, the disowned son of chieftain Leoroxx, was the only remaining one left on Azeroth. Their last remaining settlement is Mok'Nathal Village in the eastern area of the Blade's Edge Mountains.