This article is using {{Card template}}.
See Help:Style guide/Card for how to edit this kind of article.
Edit this article
Mojomaster Zihi
51136 • TRL_564
Regular 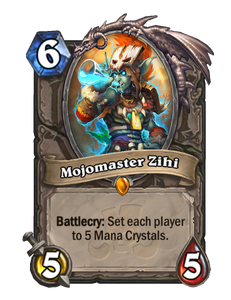 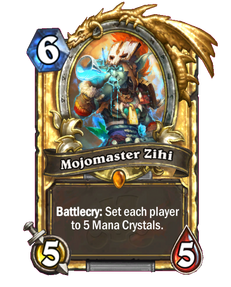 Sadly, she was still two credits short of her Witch Doctorate. 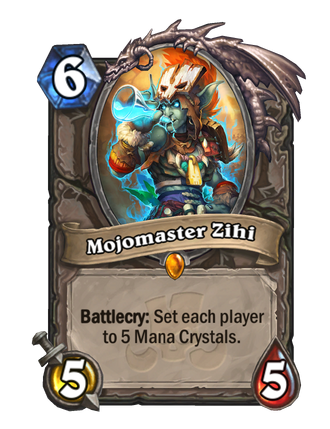 When Mojomaster Zihi is played with less than 5 total Mana in your tray, she will give empty Mana crystals.

Mojomaster Zihi has a unique double-edged effect of setting both players' mana to 5, which in practical cases lowers both players' mana count. This card can be used as a tech card against control and combo decks by delaying when they can play their high-cost cards or their combo pieces by several turns, as well as against druids that have ramped up their mana very quickly. Since this card will also lower your mana count, it's best to run it in non-control decks to lessen the negative effects on yourself.

It can also be used with

Surrender to Madness to put both players on an even field in terms of mana count while receiving the benefits of bonus stats.