This article is using {{Card template}}.
See Help:Style guide/Card for how to edit this kind of article.
Edit this article
Mogu Cultist
54291 • ULD_705
Regular 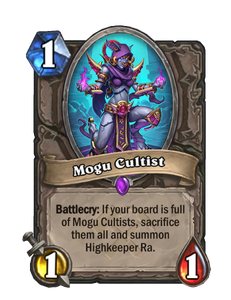 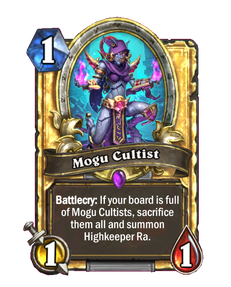 Dimensions: Full • 330 x 410px
Battlecry: If your board is full of Mogu Cultists, sacrifice them all and summon Highkeeper Ra.
Flavor text 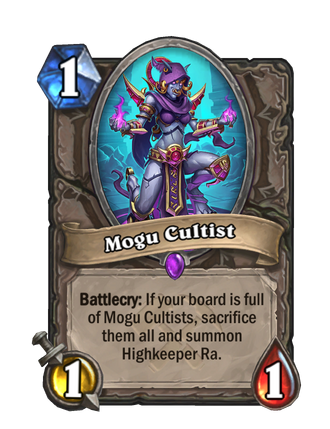 Mogu Cultist is an epic neutral minion card, from the Saviors of Uldum set. 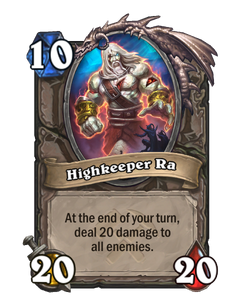 Highkeeper Ra is best done with a Rogue deck. Mogu Cultist can be combined with

Togwaggle's Scheme to give you the required amount of Cultists to summon Ra the next turn. Afterwards, you can use

Shadow of Death with

Drakkari Enchanter will double Ra's damage for lethal without requiring any mana-reducing resources.

Another possible way is to use

Tolin's Goblet, and there is a very slight chance that you will be able to draw a Mogu Cultist, thus filling your hand with copies of it. However, this requires a lot of luck and is not very likely to succeed. You can however manipulate this by emptying your deck, then putting more Mogu Cultists in with cards like

Potion of Illusion to create a 1-cost copy of itself, then use that to copy your Mogu Cultists, then you use it to copy Highkeeper Ra for lethal damage. You can use

Fireblast to kill off your Tortollan Pilgrims to make room to summon Highkeeper Ra.

Alternatively, you can use

Glinda Crowskin on Warlock. You can summon 6 copies, kill off Glinda with

Grim Rally, then play the last (Echo-copied) Mogu Cultist. This combo is not possible on one turn normally, so you will need to draw Glinda with

Tome of Origination from

Supreme Archaeology to make this combo possible, which you can guarantee using

Baleful Banker with an empty deck. Alternatively in Wild, you can use

The Coin on that turn).

Mogu Cultist is a rare example of a female mogu, of which only a handful are known to exist and who are shrouded in mystery and speculation.

The Mogu Cultists are apparently worshippers of

Highkeeper Ra, which is also unusual; while Ra was the original creator of the mogu and was once revered by them, he largely faded into obscurity after he was defeated and imprisoned by Lei Shen. A few months after the release of Saviors of Uldum, the Rajani, a group of mogu serving Ra, debuted in World of Warcraft, suggesting that the Mogu Cultists may be affiliated with them.