This article is using {{Card template}}.
See Help:Style guide/Card for how to edit this kind of article.
Edit this article
Moat Lurker
39465 • KAR_041
Regular 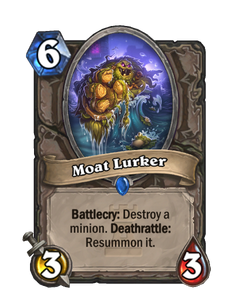 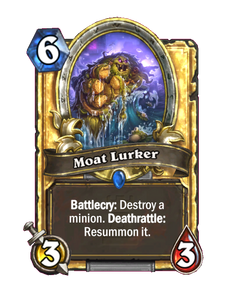 He really enjoys lurking and gets a lot of job satisfaction out of it. 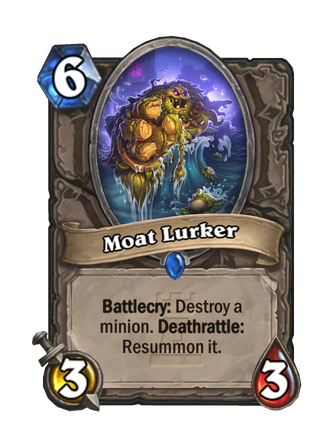 Moat Lurker is a rare neutral minion card, from the One Night in Karazhan set.

Moat Lurker is an interesting card with many possible applications. Its strongest synergy is with Deathrattle minions. Destroying and then resummoning a friendly minion such as

Sylvanas Windrunner allows the player to benefit from her Deathrattle an additional time, and on demand, rather than requiring the right minion to trade her into. Other good targets include

Deathwing, Dragonlord, and in Wild format

Sneed's Old Shredder. It can also be used to remove negative enchantments such as

Corruption on friendly minions, to resummon one of

Barnes' copies with full stats, or simply to restore a minion to full Health, mainly useful for large minions such as damaged Giants. In this role it functions much like a delayed

However, the delay is critical, both in terms of tempo and the chance that the Moat Lurker will be Silenced or transformed before its Deathrattle can activate. The risk can be reduced by playing Moat Lurker while the opponent has a minion on the board with high enough Attack to destroy the Moat Lurker, activating its Deathrattle, although a Taunt can easily spoil this plan. If using this card to destroy a friendly minion, make sure to get the most use out of the target minion before it is destroyed.

Moat Lurker can also be used on enemy minions. It can be an effective way of temporarily removing Taunts or especially powerful minions, allowing access to the enemy hero, countering problematic effects, or simply breaking the opponent's tempo. If combined with a Silence or return to hand effect the minion will be permanently lost, since the related Deathrattle will be lost. This last strategy is usually both mana and card inefficient (although

Purify is one exception) but can provide an excellent counter when no other adequate removal is available. Even if the minion is eventually resummoned by the Moat Lurker's Deathrattle, the process will permanently remove useful enchantments like

Blessing of Kings or the Battlecry buff of

A very good late game combination is to play

Spiritsinger Umbra and Moat Lurker (costing 10 mana combined) in a single turn. The minion targeted by the Moat Lurker will immediately be resummoned (at full Health) due to the Spiritsinger's effect, and a second copy of it will be summoned when the Moatlurker dies.