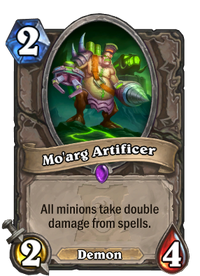 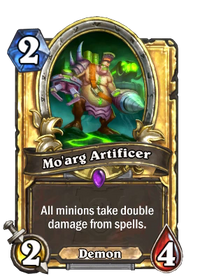 Double-damage. You know the drill.

Mo'arg Artificer is a epic neutral minion card, from the Ashes of Outland set.

Mo'arg Artificer is most at home in spell-heavy Control decks. You're less likely to have other minions in play, nullifying most of the symmetrical downside. The additional stat point helps control the board against opposing 3/2 minions when played on curve, and the continuous effect can allow for high-powered board clears later in the game. Lifesteal spells like Nether Breath and Penance benefit greatly from the doubled heal as well. At worst, your opponent will be forced to use a removal spell on this card.

The mo'arg are powerful and highly intelligent demon members of the Burning Legion. They are extremely diverse, with subspecies ranging from stunted gan'arg and imposing felguards to colossal brutes and fel lords. A demonic species hailing from the Twisting Nether, the mo'arg were some of Sargeras' opponents when he was still the defender of the Pantheon. After Sargeras betrayed the Pantheon, the highly resourceful and industrious mo'arg were recruited into the Legion to serve as armorers, forging fel-infused weaponry and constructs to besiege the worlds of the cosmos.

Brutish though they may seem, these iron-stitched horrors are exceedingly brilliant engineers and forge-smiths. Their black iron constructs have sown death across a thousand worlds. Many mo'arg are tinkerers, scientists, blacksmiths, and engineers that have "improved" their own bodies with bionic parts. Others instead serve the Legion armies as felguards. Fel lords are speculated by some scholars of the Legion to be an evolved version of the felguard.

Even with muscular, tall and broad build, many mo'arg have improved their own bodies with bionic parts. A sickly green substance runs trough their veins, bleeding from their sharp-toothed mouths and from incisions in the torso and around neck; metal stitches barely maintain their patchwork skin. They are hairless and their feet display two front claws and a rear single claw. When not replaced with a bionic part, mo'arg eyes are white and seemingly without pupil.