This article is using {{Card template}}.
See Help:Style guide/Card for how to edit this kind of article.
Edit this article
Misdirection
1091 • EX1_533
Regular 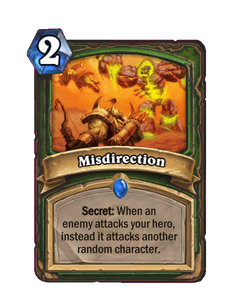 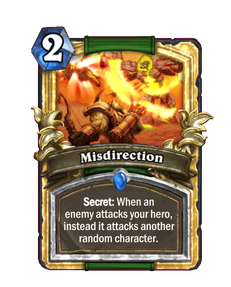 Dimensions: Full • 330 x 410px
Secret: When an enemy attacks your hero, instead it attacks another random character.
Flavor text

Sometimes it's as simple as putting on a fake mustache and pointing at someone else. 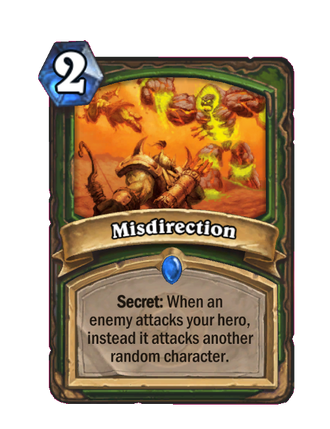 Misdirection is a rare hunter spell card, inducted into the Legacy set, formerly from the Classic set. 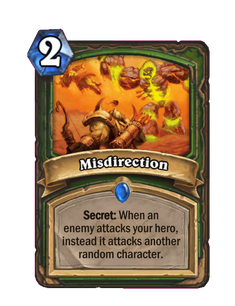 Misdirection is a more situational secret compared to other hunter secrets. It is best used when the board is not controlled, ensuring that an enemy will be chosen as the target. Misdirection is comparable to

Sudden Betrayal, but Misdirection has the ability to end the game if the opponent happened to choose a large minion when lacking health.

Misdirection is generally underwhelming when heroes have abundant amounts of health, as

Explosive Trap is better at clearing off small minions and

Freezing Trap is better at clearing individual big minions. Despite that, Misdirection is still a valid tech card against decks primarily made of large minions, such as Khadgar Mage, Even Warlock, or Big Priest

Misdirection is a hunter ability in World of Warcraft that causes the hunter to shift all threat caused by their next attack and all actions afterward for eight seconds to a pre-selected party or raid member (such as a tank in a raid).