This article is using {{Card template}}.
See Help:Style guide/Card for how to edit this kind of article.
Edit this article
Mirror Image
1084 • CS2_027
Regular 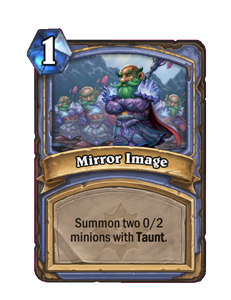 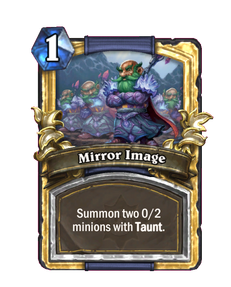 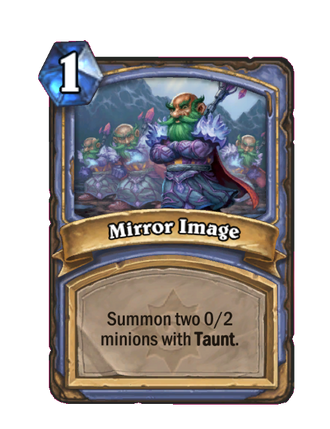 Mirror Image is a mage spell card, inducted into the Legacy set, formerly from the Basic set. It summons two 0/2 Mirror Images with Taunt. 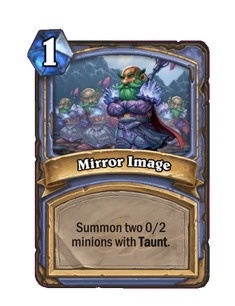 Regular and golden Mirror Image are uncraftable and cannot be crafted or disenchanted. 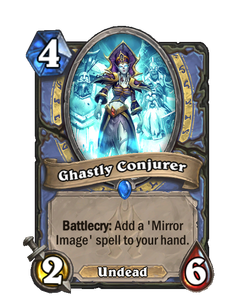 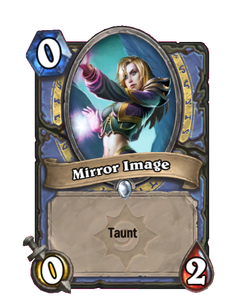 Mirror Images are a cheap, effective way of bringing Taunts onto the board in the early game and excel in buying you 1-2 rounds as your opponent deals with them.

While the Mirror Images cannot normally attack (as they have 0 Attack), +Attack buffs such as those from

Stormwind Champion can grant them the ability to do so.

Note that although this card acts to summon minions, it is in fact a spell. This allows it to interact with cards such as

Although it is a good card to play early on, it might still be very effective late in the game. If your opponent has 1 or 2 heavy hitting minions on the battlefield and not much else to deal with the Mirror Images, they might buy you enough time to finish the enemy off with a few powerful spells, or even draw into answers to their board presence.

This card can be effective in specifically protecting valuable minions when played at the same time as those minions, providing an instant defence against physical attacks. This can prevent the opponent from immediately removing valuable minions, giving the controlling player a turn or two to make use of them before they are countered. This works especially well with spell-triggered minions such as

Gadgetzan Auctioneer, where the spell can serve as both Taunt and fuel for card generation.

Knife Juggler (2 points of damage for 1 mana) as well as being an excellent way of protecting this valuable but vulnerable minion.

"How do you know which one is real?!" —Dizdemona

Mirror Image is a mage spell from World of Warcraft. In the game, the spells creates three mirror images of the mage, identical in every detail, who will attack the mage's enemies by casting spells such as Frostbolt. While these clones can deal some useful additional damage, they also serve another purpose - distraction. Summoning them causes any enemies to deselect the mage, forcing them to then manually search through the clones in order to find the real mage. It is clearly this aspect of the original spell which inspired the Hearthstone version.

Battle aside, mages are well known in Warcraft lore for creating lasting multiple images of themselves. These may be used to assist in spell-casting, or even take the mage's place in complex interactions such as experimentation, conversation, and the instruction of disciples.