This article is using {{Card template}}.
See Help:Style guide/Card for how to edit this kind of article.
Edit this article
Mirror Entity
195 • EX1_294
Regular 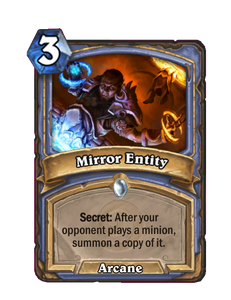 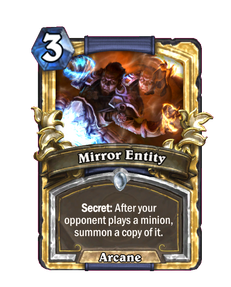 Dimensions: Full • 330 x 410px
Secret: After your opponent plays a minion, summon a copy of it.
Flavor text

"You go first." - Krush'gor the Behemoth, to his pet boar. 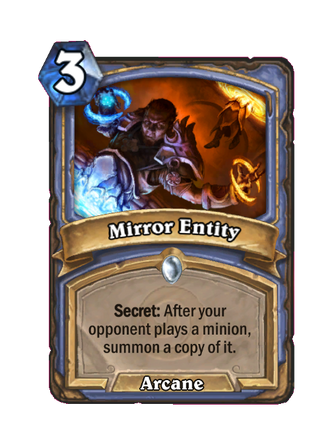 Mirror Entity is a common mage spell card, inducted into the Legacy set, formerly from the Classic set. 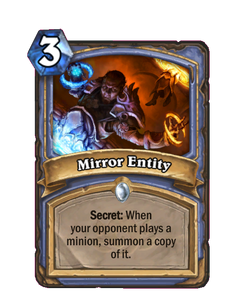 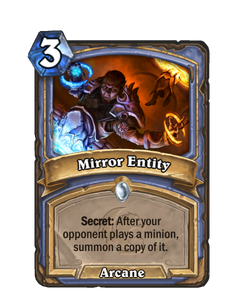 Two copies of regular Mirror Entity are obtained for raising mage to level 1.

Mirror Entity (Core) is uncraftable and cannot be crafted or disenchanted.

This card is best played in the late game, as it has a higher chance to copy a strong minion then. It is also useful for countermanding an opponent with an empty board who may attempt to play in a large minion to regain board presence. In fact, a good strategy to coerce your opponent into giving you a free minion is to flood your side of the battlefield with smaller minions or a large one of you own, as this will likely prompt them to play something costly in order to defend themselves.

Vaporize, another popular Mage secret. The effect of Mirror Entity can also be mitigated somewhat by playing an understatted minion with a powerful non-buffing Battlecry: the Battlecry will only activate for the original minion, and not for the copy. Bear in mind though that if the Battlecry buffs the summoned minion, Mirror Entity will copy the buff along with the minion, making cards like

This spell doesn't seem to have a precise match in Warcraft lore. However, mages are well-known as masters of illusions, able to summon multiple fully-functioning images of themselves to assist in battle or even teaching and spell-casting, such as through the spell