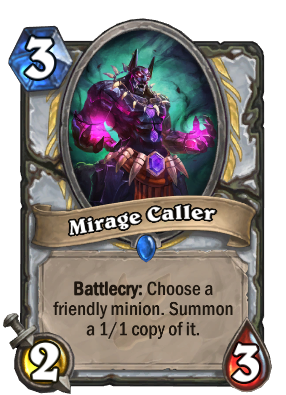 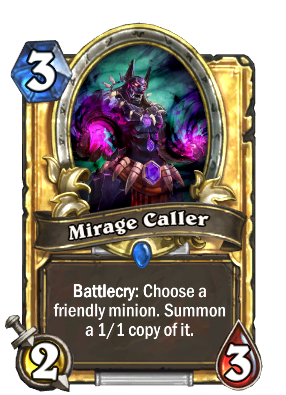 Uncollectible
Battlecry: Choose a friendly minion. Summon a 1/1 copy of it.
Flavor text

Mirage is actually the name of its long-lost cat.

Mirage Caller is a rare priest minion card, from the Journey to Un'Goro set.

Mirage Caller can be obtained through Journey to Un'Goro card packs, or through crafting.

Essentially a miniature version of Herald Volazj, Mirage Caller can be used to great effect when copying a minion that has a powerful effect not dependent on stats, particularly minions with Deathrattle (such as Cairne Bloodhoof or Shifting Shade), Spell Damage (such as Prophet Velen or Evolved Kobold) or triggered effects (such as Ragnaros, Lightlord or Hogger). Mirage Caller can also be used as a simple way of summoning The Ancient One when used in combination with Blood of The Ancient One.

A bug existed that allowed players to crash the game for their opponent and get a free win. It could be triggered when Power Word: Glory or certain other cards like Blessing of Wisdom, Nightmare, Sudden Genesis, Menagerie Warden or Molten Reflection were cast on a minion that was then targeted by Mirage Caller.

The bug was forwarded to streamer/youtuber DisguisedToast, who demonstrated it in his live stream and received a 3 days ban on his account for making it public.