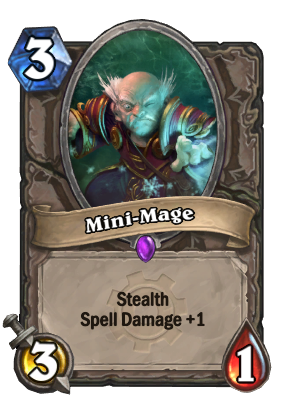 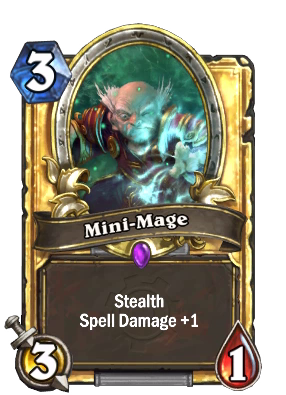 He is sometimes found hiding in the treasure chest in the Gurubashi Arena.

Mini-Mage is an epic neutral minion card, from the Goblins vs Gnomes set. 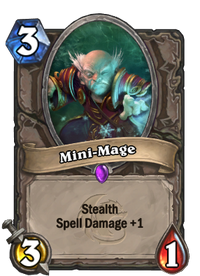 Mini-Mage can be obtained through Goblins vs Gnomes card packs, or through crafting.

Two copies of regular Mini-Mage (Core) are obtained for raising sum of all your class levels to 23.

Two copies of golden Mini-Mage (Core) are obtained for winning 2500 games across all classes.

Mini-Mage (Core) is uncraftable and cannot be crafted or disenchanted.

Mini-Mage powers up spell combos without the battle vulnerability of most Spell Damage minions. It grants extra damage to weak, self-replacing rogue cards like Shiv or Headcrack, or sets up for massive burst with Ice Lance in a mage deck. However its 1 Health makes it weak to spell-heavy decks with AoE, and its high cost renders it too slow to use against minion-rush.