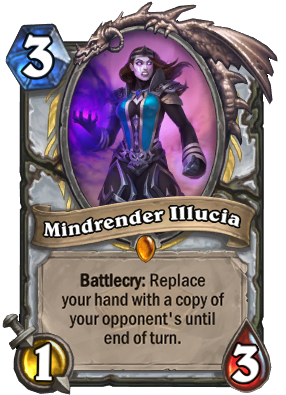 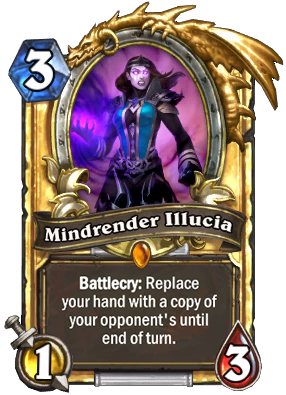 Elite
Battlecry: Replace your hand with a copy of your opponent's until end of turn.
Flavor text

"…and that's how I ended up with a Murloc Cultural Studies major."

Mindrender Illucia is a legendary priest minion card, from the Scholomance Academy set.

When playing Illucia, you have the opportunity to waste your opponent's resources, giving you board advantage and effectively discarding cards from their hand. Even using cards inefficiently, like a Shadow Madness just to hit face or Edwin VanCleef with hardly anything on his Combo is fine, since this removes those cards from your opponent. If the opponent has direct damage spells, you should almost always cast them to limit their kill potential. However, your opponent will have the ability to do the same to you, and will even draw a card from your deck at the start of their turn. Additionally, you will only have up to seven mana to use while your opponent will have up to ten. It's best to play Illucia when you have no cards in your hand, or only very situational cards, limiting how much she can backfire.

Against fast decks, an early Illucia can allow you to steal your opponent’s coin and cause them to lose their entire next turn if your hand is full of high cost cards. While you might not be able to steal much, the tempo loss will severely hurt aggressive players.

Against slower decks, Illucia can be used late in the game to steal important threats like Hero cards and big minions. It can also completely destroy combo decks, wasting combo cards like Kael'thas Sunstrider and Archmage Vargoth at no value to them.

You should avoid drawing or generating cards after playing Illucia, unless you can play them immediately. Anything you generate will be given back to your opponent. For this reason, deck-buffing cards like Survival of the Fittest and Luna's Pocket Galaxy are impossible to waste, since the buff goes right back to them.

Lady Illucia Barov was the wife of Lord Alexei Barov and the mother of Jandice Barov. She was a powerful necromancer and corrupt aristocrat specializing in Shadow magic who taught at the Scholomance Academy with Headmaster Kel'Thuzad.

After the school's corruption, her undead shade continued to haunt the halls of the Academy, unleashing powerful and deadly Shadow attacks on living adventurers.

Lady Illucia Barov was a level 43 elite ghost mini-boss found in Scholomance. She was the wife of Lord Alexei Barov and formerly one of the six mini-bosses who had be killed in order to summon Darkmaster Gandling. She uses only shadow spells.

Commentary: With the refinement of Shadow Priest in recent weeks, Mindrender Illucia has been overperforming in the archetype, in an unintended way. Instead of being used as a late game disruption tool, Shadow Priests have been using Illucia as an early game play to essentially skip the opponent’s turn. This change is aimed at removing that problematic gameplay from Illucia, while still keeping her in a similar space with her effect.