This article is using {{Card template}}.
See Help:Style guide/Card for how to edit this kind of article.
Edit this article
Mindbreaker
45314 • ICC_902
Regular He's a mind breaker, dream taker, ghoul trainer, don't you mess around with him. 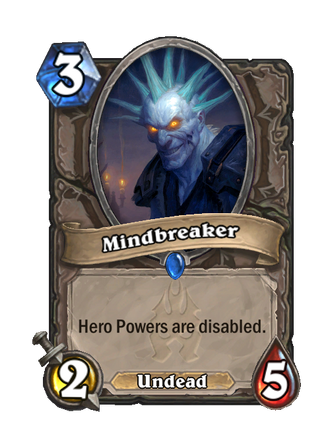 Mindbreaker is a rare neutral minion card, from the Knights of the Frozen Throne set.

This minion has decent stats for its mana cost, comparable to

Carrion Grub. However, Mindbreaker's main strength lies in its effect. It can be valuable in certain constructed decks such as Pirate Warrior, where the Hero Power is rarely used, and in both constructed and Arena it can be an effective tool when facing classes such as hunter, mage, or warlock. Mindbreaker's best use is countering opponents with improved Hero Powers, such as ones provided by

Lord Jaraxxus, Hero cards or ones buffed by

Genn Greymane. These are all highly valuable Hero Powers, and disabling them can potentially turn the tide of a game.