This article is using {{Card template}}.
See Help:Style guide/Card for how to edit this kind of article.
Edit this article
Mind Vision
1099 • CS2_003
Regular 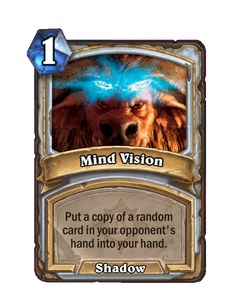 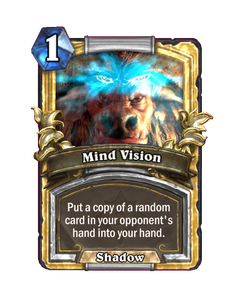 Dimensions: Full • 330 x 410px
Put a copy of a random card in your opponent's hand into your hand.
Flavor text

I see what you did there. 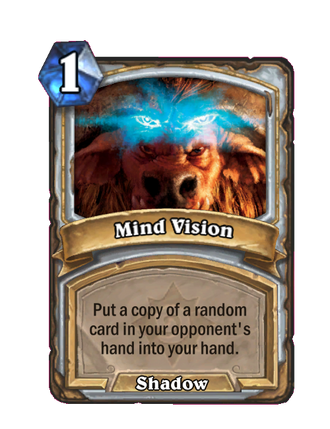 Mind Vision is a priest spell card, inducted into the Legacy set, formerly from the Basic set. 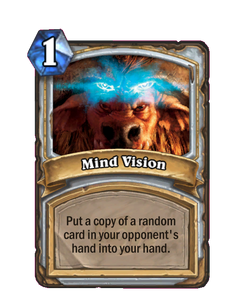 Regular and golden Mind Vision are uncraftable and cannot be crafted or disenchanted.

Mind Vision can be an effective card to play on turn 1, as your opponent is likely to have kept low-cost spells or minions which you can then take advantage of.

Mindgames, Mind Vision does not draw from the opponent's deck, but from their hand. This gives the priest valuable information about the opponent's game plan and how they may attempt to use that card, allowing for adjustments to strategy.

Likewise, the opponent will know the range of possible cards the priest may have copied, often allowing them to play around them accordingly. This depends heavily on the size of the opponent's hand; with only 1 card in hand the opponent will be certain of Mind Vision's result, but with 10 cards determining which one has been copied will be far less easy. When the opponent's hand contains neutral cards, they may wish to note the position of the copied cards in the priest's hand in order to be sure when they have been used, ruling out other possibilities.

"Everything looks so much smaller through a tauren's eyes."

Mind Vision is a channelled priest spell from World of Warcraft which allows the caster to see through the eyes of the target for up to 1 minute. A utility spell, Mind Vision sees little use from most players, but can offer strategic benefits. Used in a battleground such as Warsong Gulch, it can be used to locate the enemy flag carrier before they appear on the map. It can also be useful in casual battlegrounds for quickly ascertaining the state of play, through using the spell on various team members around the map in quick succession. The priest can pick a defending point, then use Mind Vision to cycle through their teammates, calling for reinforcements and warning of attacks, where the teammate themselves may be too busy fighting to do so. As a channelled effect, priests using Mind Vision must however take care not to let enemies sneak up on them while they are looking through the eyes of another.