This article is using {{Card template}}.
See Help:Style guide/Card for how to edit this kind of article.
Edit this article
Mind Control Tech
734 • EX1_085
Regular 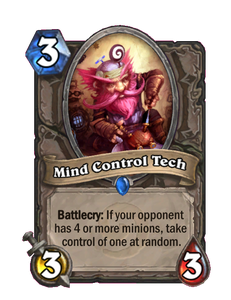 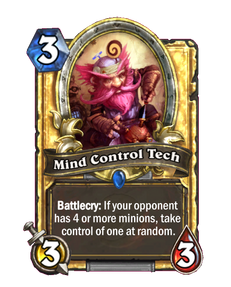 Dimensions: Full • 330 x 410px
Battlecry: If your opponent has 4 or more minions, take control of one at random.
Flavor text

Mind Control technology is getting better, but that's not saying much. 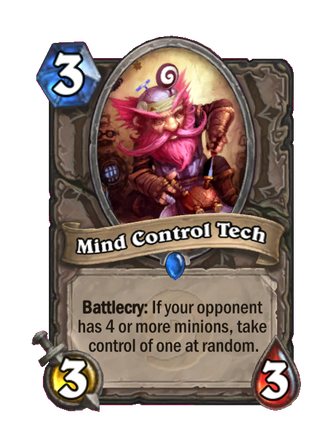 Mind Control Tech is a rare neutral minion card, inducted into the Legacy set, formerly from the Classic set and Hall of Fame sets. 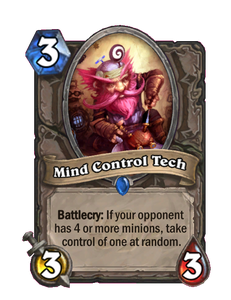 Mind Control Tech is good against decks whose objective is to fill the board with minions, such as Zoo, Murloc, or

Hobgoblin decks. You may be able to steal a strong early-game or buffed minion, strengthening your board and disrupting the tempo of your opponent.

With decks that have effects allowing to use a Battlecry twice, if the enemy board has five or more minions, you can steal two of them.

Mind Control Tech is clearly inspired by the Gnomish Mind Control Cap from World of Warcraft. Using the cap allows its wearer to "engage in mental combat with a humanoid target to try and control their mind." Gnomes are known for their inventiveness, as well as for the unpredictability of their inventions, as reflected in this card.