This article is using {{Card template}}.
See Help:Style guide/Card for how to edit this kind of article.
Edit this article
Mind Control
8 • CS1_113
Regular 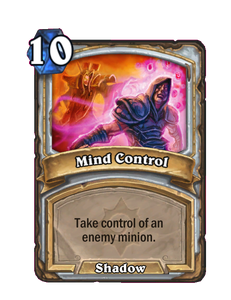 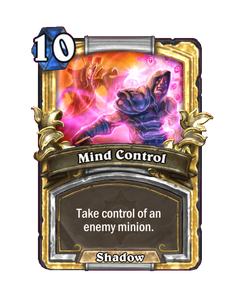 Nominated as "Spell Most Likely to Make Your Opponent Punch the Wall." 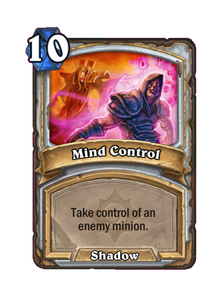 Mind Control is a priest spell card, inducted into the Legacy set, formerly from the Basic set. It is the quintessential mind control effect. 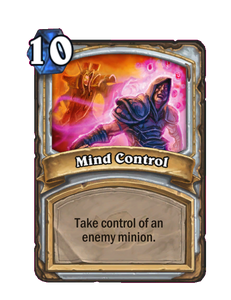 Regular and golden Mind Control are uncraftable and cannot be crafted or disenchanted.

Being among the strongest cards in priest's basic cards, new players should always assume that their opponent will have at least one Mind Control in their deck when playing against priest. While this is not necessarily true, because of the power of Mind Control, players will often choose to expect its use, and alter their actions accordingly.

Most importantly, this affects buffing a single minion to extreme levels and the summoning of very powerful minions, especially legendaries. For example, a player tempted to play Deathwing may choose not to if he is playing against a priest (unless the priest has already used 2 x Mind Control) due to the risk of the priest Mind-Controlling Deathwing and defeating the player. A C'Thun of 15 - 20 attack could spell doom for the opponent if the Battlecry does not succeed in killing the priest. The priest taking an opponent's sticky cards like Rattlegore can instantly give them board control. Even if the priest currently has no cards in their hand, experienced players can easily do the maths to predict the chance of the priest drawing it next turn, and swiftly defeating the player. For this reason, when playing against priests, very powerful minions can often become a burden, with the player not wanting to play them until they are certain that the priest cannot take control of it.

Mind Control does not become available until late into the game. Players can use this knowledge to anticipate its use. Essentially, once round 10 has been reached, it is possible that the priest will use Mind Control at any time. Note that use of The Coin can allow its use on round 9. Some priests may be particularly likely to play Mind Control on round 10, due to their eagerness to make use of the card. This can be helpful to their opponent, as they may not have yet played their most valuable minions by that point.

"Why should I shed my own blood?"

Mind Control first appeared as a priest spell in the retail release of World of Warcraft. It allows the casting priest to take control of an enemy character for a few seconds, and to make limited use of their abilities. The spell is infamous for its use in PvP battlegrounds, with priests using it to send enemy players leaping to their death from high places. Before the introduction of diminishing returns, the spell had a 1-minute duration and could be repeatedly cast on a given target, potentially allowing a priest to control another player indefinitely. One player known as Booms infamously used the spell to hold Alliance players to ransom, demanding that they mail gold to one of his alts before he would release them. With the introduction of diminishing returns this possibility was removed, although the ability remains a potential source of great frustration for the target, and grim satisfaction for the user. With Mists of Pandaria Mind Control was renamed 'Dominate Mind', and made into a talent, further limiting its availability to priests.

A similar card is also found in the "Heroes of Azeroth" deck of the World of Warcraft Trading Card Game.