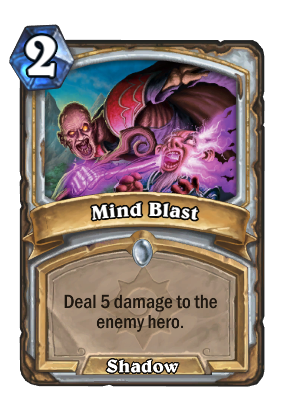 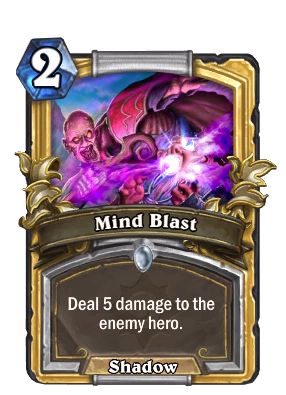 This spell blasts you directly in the MIND.

Mind Blast is a common priest spell card, inducted into the Legacy set, formerly from Hall of Fame and Basic sets. 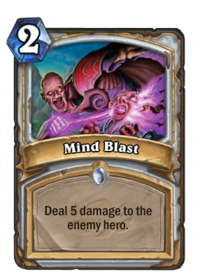 Mind Blast can be obtained through crafting only.

While Mind Blast may seem cheap for such a large amount of damage, remember that it is locked to the enemy hero, and unlike Holy Smite cannot be used to affect any other target.

Mind Blast is one of the only cards which can be used by priests to 'nuke' opponents. Mind Blast x2 can deal 10 damage for only 4 mana; improved with Spell Damage or in combination with other spells or minion attacks, a priest with the right cards can easily take a low-health opponent by surprise.

Easily the deadliest card that can combine with Mind Blast is Prophet Velen; with 9 mana you can drop Velen and use Mind Blast on the same turn to effectively Pyroblast the enemy hero while also adding a 7/7 to the board. Mind Blast is the core of one turn kill combo decks involving Velen, using many varying setups such as Flash Heal, Embrace the Shadow and Emperor Thaurissan or Lesser Diamond Spellstone, Radiant Elemental, and Vivid Nightmare.

Since being moved to the Wild format, it's main use is in combo decks. It aims to gain multiple copies of Mind Blast through Shadow Visions, Reduce their cost with Emperor Thaurissan, and combo them with Prophet Velen for up to 40 damage to the enemy hero.

Mind Blast is a core Shadow priest spell from World of Warcraft. It is a 1.5-sec cast spell that deals substantial direct Shadow damage to the target, and grants Insanity, a resource, required to enter Voidform. One of the Shadow priest's most powerful attacks, it also has a lengthy cooldown. In Classic WoW, the spell was available to all priests, and along with many other spells revolving around the enemy mind led players to term the playstyle 'face-melting'.

Commentary: "Mind Blast gives Priests the ability to inflict a large amount of direct Face damage. We want to limit the amount of damage that Priests are able to deal from their hand, which will allow us to make cards that better emphasize their strengths in controlling the game."