This article is using {{Card template}}.
See Help:Style guide/Card for how to edit this kind of article.
Edit this article
Millhouse Manastorm
855 • NEW1_029
Regular 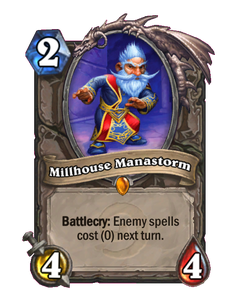 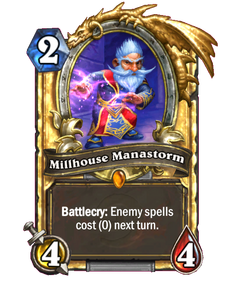 "I'm gonna light you up, sweetcheeks!" 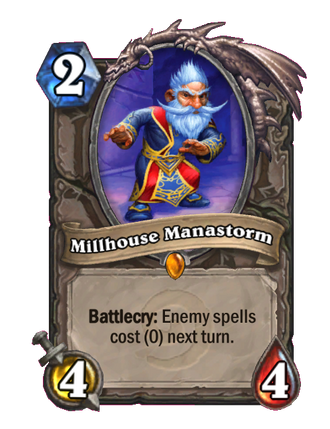 Millhouse Manastorm is a legendary neutral minion card, inducted into the Legacy set, formerly from the Classic set. 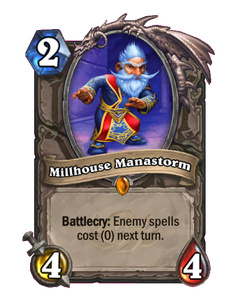 Majordomo Executus, the reputation of Millhouse Manastorm is indeed legendary - as a card just as likely to harm his owner as it is to kill the opponent. Like Executus, he's a risky fringe play useful in rare situations. Unlike Executus, even his potential upside is small.

Theoretically, he can give you an early advantage. If you play first he can be a turn 2 4/4, and if you go second he can be a turn 1 4/4. The only downside is that spells cost 0 for your opponent next turn, so you had better be careful what type of deck you play him against. If your opponent isn't holding any spells, you now have a very efficient body for the stats. If they are, this legendary gnome can have unforeseen and devastating consequences -such as early-game

Sprint, etc. Some players will mulligan such expensive cards away if they draw them in their opening hand, since no player will actually anticipate a Millhouse Manastorm, but it is also possible that a player may simply end up with at least one high-cost spell after a mulligan as well.

This can result in disaster, as high-cost spells can grant excessive advantages. It is extremely dangerous to cast Millhouse as a result against anything but a nearly-empty hand. He is most perilous of all against the mage class, who may be able to defeat your hero outright using the damage spells they have in hand. Certain mage decks such as Freeze Mage intentionally hoard damage spells over the game, making a Millhouse an invitation to unload 20 or more damage in a single turn. Card draw mechanics such as

Gadgetzan Auctioneer can also be very effective for providing the player with an endless supply of spells while Millhouse's effect lasts, making it a bad idea to play him while the opponent has such mechanics in place. In extreme cases Millhouse can allow the opponent to defeat the player as early as turn 1, through allowing the use of multiple direct damage spells. For example,

Fireball x 2 will allow a mage to deal 32 points of damage for 0 mana if the opponent has just played Millhouse.

If played under the right conditions, Millhouse can be a cheap 4/4, and in the first few turns can create a significant increase in tempo. In the later game his low cost tends to be fairly insignificant, while the potential for absolute disaster increases as the opponent's hand grows.

There are a few ways to summon Millhouse without activating his Battlecry, such as Recruit effects like

Piloted Reaper. While pulling Millhouse this way is good for value, it downplays his potential to out-tempo the opponent early game with his large stats.

Do not ever play Millhouse while

Archmage Antonidas is on the board: This will result in an almost definite loss. This is because all the enemy hero needs on their turn is one spell in hand and can keep creating 0-cost Fireballs for free, which can target your hero even if it has Taunts or other usual 'control' threats on the board.

Medivh, the Guardian and

Atiesh for one turn; his Battlecry will cause any spells the enemy plays to summon random 0-cost minions which are not very useful.

"Aaalllriiiight!! Who ordered up an extra large can of whoop-ass?"

Millhouse Manastorm is a gnome mage who was first encountered imprisoned in the Arcatraz wing of the Burning Crusade instance Tempest Keep. Originally, players had to ensure Millhouse's survival during the Harbinger Skyriss fight, who would then grant them the key to The Eye wing of the Keep. Years later, Millhouse was encountered as a convert to the Twilight's Hammer, and more recently he has been seen as a combatant in the Brawler's Guild.