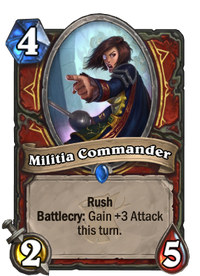 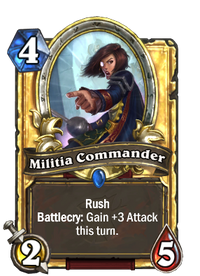 She only needs two commands: "Heel" and "Sic 'em!"

Militia Commander is a rare warrior minion card, from the The Witchwood set.

Militia Commander can be obtained through The Witchwood card packs, or through crafting.

This minion provides strong removal option on a minion. At 5 Attack at 4 Mana, it's able to kill off most minions of relative mana cost while having a large amount of Health to survive trading. It pays for this tempo burst with a weak base Attack it has on the following turns.

Like other Rush cards, it's an effective activator for effects involving damaged minions like Battle Rage and Frothing Berserker.