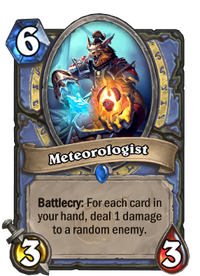 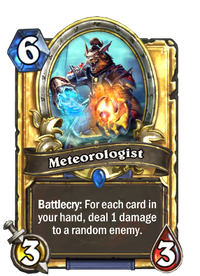 Battlecry: For each card in your hand, deal 1 damage to a random enemy.

Some say the world will end in fire. Some say in ice. Why not BOTH?

Meteorologist is a rare mage minion card, from The Boomsday Project set.

Meteorologist can be obtained through The Boomsday Project card packs, or through crafting.

While its stats are extremely poor, its Battlecry has the potential to deal as much as 9 damage, making its effect very powerful with a large hand. While not game-breaking enough to create a deck entirely focusing on card draw, it's a good inclusion in control decks, due to their tendency to have a sizable hand in the mid-game. Elemental Mage works particularly well since their deck runs plenty of card draw and card-generating cards. This is especially good in Turtle Mage where you can play this repeatedly with Potion of Illusion and Tortollan Pilgrim.