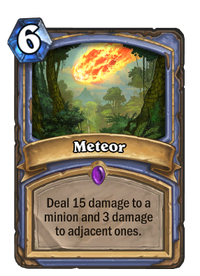 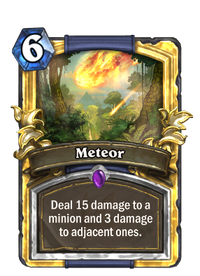 Deal 15 damage to a minion and 3 damage to adjacent ones.
Flavor text

When you absolutely, positively, have to kill all the dinosaurs.

Meteor is an epic mage spell card, from the Journey to Un'Goro set.

Meteor can be obtained through Journey to Un'Goro card packs, or through crafting.

While it's difficult to make full use out of the 15 damage, Meteor is still an efficient removal spell that can target one large minion and two medium or small ones. Trade before using the spell so that your opponent's weakest minions are beside their strongest one, letting Meteor get a 3-for-1. You don't always need to use the extra damage either - destroying three 3-health minions is comparable to Flamestrike.

Notably, the spell is powerful enough to destroy an Ultrasaur or summoned Lord Jaraxxus by itself. It can also take out a large Jade Golem.

When playing against a Mage, try to position your largest minion on the outside of your board and to group your high-health minions together, lowering the efficiency of the card.