This article is using {{Card template}}.
See Help:Style guide/Card for how to edit this kind of article.
Edit this article
Metamorphosis
56899 • BT_429
Regular 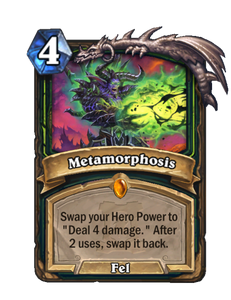 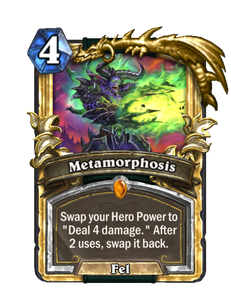 As the humble caterpillar becomes a beautiful butterfly, so too does a demon hunter become a hideous mass of writhing destruction and unfettered chaos. 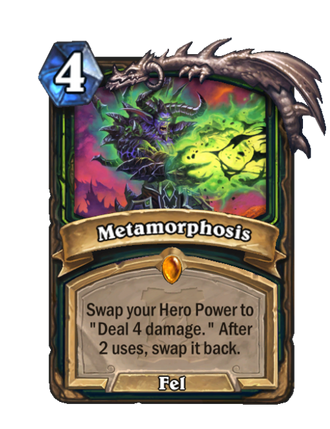 Metamorphosis is a legendary demon hunter spell card, from the Ashes of Outland set. 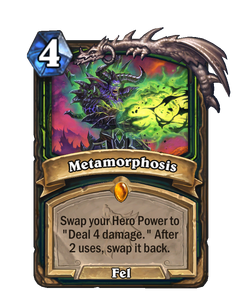 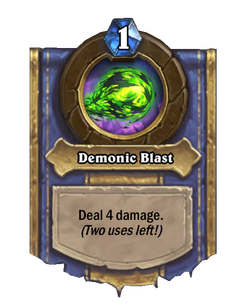 Metamorphosis allows for a huge payoff by investing a lot of mana upfront. The initial cast is either 5 mana to do nothing or 6 mana to deal 4 damage, both of which are fairly lackluster. However, on one or two turns you'll be able to deal 4 damage to any target for only 1 mana. Metamorphosis can be used as a finisher, threatening 8 total damage over 2 turns. Alternatively, it's an efficient source of minion removal. Either way, its cheap cost allows you to continue playing cards alongside the hero power, keeping up pressure on the board or responding to your opponent's plays.

The best way to play around an opponent's Demonic Blast is to play wide. With a board of medium or small minions, most of the 4 damage will be put to waste, greatly lowering the value of this card.

Metamorphosis is an iconic demon hunter ability. It allows the user to temporarily become a demon, empowering them for its duration. It first appeared in Warcraft III as the ultimate ability of the Demon Hunter.

It first appeared in World of Warcraft as a warlock ability. However, it was removed and redesigned when Demon Hunters became playable in Legion. This version of the ability was split into two spells, with Havoc demon hunters growing the iconic wings and shadowy aura, and Vengeance demon hunters becoming tougher to kill and growing spikes on their body (much like this card's artwork).