This article is using {{Card template}}.
See Help:Style guide/Card for how to edit this kind of article.
Edit this article
Mekgineer Thermaplugg
2084 • GVG_116
Regular 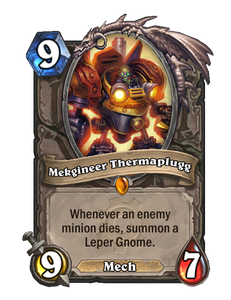 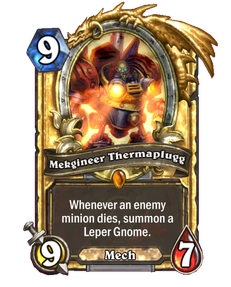 He was obsessed with explosives until he discovered knitting. Now he yells, “SWEATERS! MORE SWEATERS!” 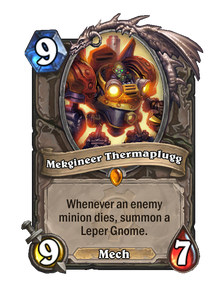 Mekgineer Thermaplugg is a legendary neutral minion card, from the Goblins vs Gnomes set. Its triggered effect summons Leper Gnomes. 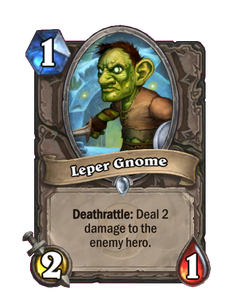 Due to Thermaplugg's high cost, a distinct lack of Battlecry, and a somewhat useful triggered effect, he can be used effectively with Recruit cards such as Gather Your Party and Woecleaver, or similar effects such as Y'Shaarj, Rage Unbound and Dimensional Ripper. Doing so likely decreases the cost of putting Thermaplugg onto the board, and can decrease the difficulty of destroying enemy minions on the turn he is summoned. Since he is a mech, another way to decrease Thermaplugg's cost would be using Mechwarper or Galvanizer.

Thermaplugg's triggered effect also means that cards such as Kobold Illusionist and Barnes can summon smaller copies of him with the same effect. Resurrection effects are another method to making more copies of Thermaplugg, but the Leper Gnomes he summons have strong anti-synergy with said resurrection effects, as they will pollute the graveyard.

It is best to play Thermaplugg with a field full of minions, or give it some protection so that an AoE effect can be used on the opposing board. Note that Thermaplugg's cost generally prohibits AoE clearing on the same turn that he is summoned. Therefore, Thermaplugg rewards strategies to keep him alive until the next turn, allowing better use of his triggered effect.

Summon
Usurpers! Gnomeregan is mine!

The gnome responsible for the irradiation of Gnomeregan and the creation of the Leper Gnomes, Thermaplugg is perhaps the most villainous gnome of all time.

Mekgineer Sicco Thermaplugg was once a brilliant and wise tinker, who despite being incredibly frail even at a young age, was destined to be High Tinker. He cunningly laid the way to the seat, charming people to his side and cranking out one great invention after the next. He worked unceasingly toward his goal, for Thermaplugg planned not only making High Tinker, but also becoming the gnome's first true king in over four hundred years. He envisioned a great kingdom out of Gnomeregan, carved out of the entire western half of Dun Morogh, even if it meant relocating the nearby dwarven communities in the name of progress. Nothing would stop him! However, his closest friend, Gelbin Mekkatorque, ruined all of his goals when the council of tinkers decided that Thermaplugg was too ambitious and chose Mekkatorque instead.

Thermaplugg's sanity broke that day, and he planned on gaining revenge over his friend. Through working the system and gaining favor among the intellectual elite, Thermaplugg eventually won the seat of advisor to the High Tinker. A brooding but imaginative engineer, he served as Mekkatorque's chief advisor for many years, continuing to covet the role of High Tinker. It was his idea that, during the trogg invasion, the gnomes shut themselves from the world. Thermaplugg claimed that the world outside didn't need to be bothered by gnomish problems, for he had an idea that would both destroy the image of Mekkatorque and win him the throne. After weeks of debate, he convinced Mekkatorque to flood the halls of Gnomeregan with radiation via a bomb, thus killing the troggs. If a few gnomes died in the process, he stated, it would be a worthy sacrifice for saving the entire race. This treason against his people was only worsened when he used trickery and guile to convince the High Tinker to open the flood vents and release the bomb's radiation upon the grand city knowing well the result.

It is rumored that Thermaplugg actually knew of the trogg invasion before it began, and that he ushered in the events that befell the Gnomish race. Though those reports were never verified, Mekkatorque believes they could be true. It's currently only speculation, but many believe that Thermaplugg was the mastermind behind the entire trogg invasion.

However, due to reasons even Thermaplugg can't remember, he found himself locked inside Gnomeregan when the bomb release began. Despite his age and frailty, he did not die. Some speak that it was his ambition that saved him, while others say he hid and suffered the least of the poison. Despite this, he lived and mutated into a leper gnome. The radiation killed more gnomes than troggs, and many other gnomes in Gnomeregan's walls also suffered from radiation and became leper gnomes. However, in the ensuing chaos, Thermaplugg had begun calling himself a king. To this day he rules over the leper gnomes and continues fighting the troggs. He controls his land with a tyrannical fist, destroying outsiders as rapidly as any other enemy.

After the irradiation of the majority of the gnomish race, Sicco was branded a traitor and was sentenced to death. He disappeared shortly after the evacuation of the irradiated city. He keeps to himself most of his time since becoming king of Gnomeregan, working on insane world-conquering inventions. Thankfully, few if any will ever see the light of day. Paranoid beyond rational thought, Thermaplugg destroys anything that disturbs his work, even his own leper gnome servants. Recently, however, he opened up negotiations with the Dark Iron dwarves, allowing them use of Gnomeregan's tunnels in exchange for a part of Ironforge to call his own. No one knows what may be come of this alliance, but it won't be good.

Driven mad by the radiation, Sicco Thermaplugg remains in the former Tinkers' Court carrying out his twisted designs. His obsession for explosives shows for whenever he is threatened, the many bomb machines start up and begin producing explosive protectors, the Bomb bots, for their master. Be wary of these machines and deactivate them as soon as Thermaplugg starts them up with a bolt of electricity from his Mechanical Battle-Mount that he is never without.