This article is using {{Card template}}.
See Help:Style guide/Card for how to edit this kind of article.
Edit this article
Medivh, the Guardian
39841 • KAR_097
Regular 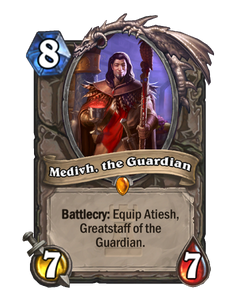 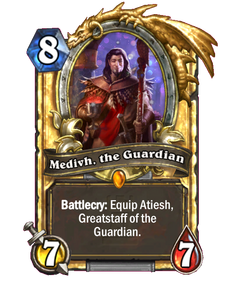 If you think the party's great now, just wait 'til he invites the orcs over! 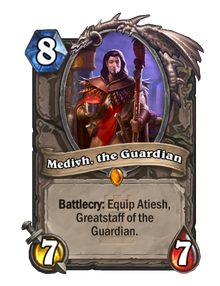 Medivh, the Guardian is a legendary neutral minion card, from the One Night in Karazhan set. 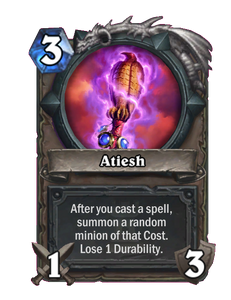 Example: If you have 10 mana and cast Forbidden Healing with Atiesh equipped, a 0-Cost minion will be summoned: despite the spell's text consumed 10 mana to boost the healing effect, the spell's mana cost was actually 0.

Example: Suppose you have Summoning Stone in play, Atiesh equipped, and a Shadowflame in hand with mana cost reduced to 1 by Emperor Thaurissan. If you play Cho'gall and use its effect to play the Shadowflame for 1 Health, you will spend no mana but both Summoning Stone and Atiesh will summon a 1-Cost minion.[3]

This minion is poor for its cost, but comes with a very useful Battlecry: equipping Atiesh. This weapon provides the same effect as Summoning Stone, albeit for 3 uses only.

The weapon's effect makes it useful in a spell-oriented deck, especially those with reasonably expensive spells, making the most of its limited duration. While the randomness of the minions summoned reduces their value somewhat, even fairly cheap spells can provide a lot of value from this card, hopefully outweighing the poorness of the minion itself.

As a weapon it is vulnerable to weapon-destroying effects like Acidic Swamp Ooze or Harrison Jones. A few effects can increase its Durability, extending its use, specifically Captain Greenskin and the warrior cards Upgrade! and Bloodsail Cultist (although Upgrade! will use up its Durability to summon a 1-mana Minion).

Has strong synergy with Twisting Nether, Pyroblast, and DOOM!. Since Atiesh's effect activates after the spell, after the spell is used it leaves the board with an 8 or 10-Mana minion on the user's side, making it a powerful method of regaining board control.

This card represents a reimagined, younger version of the archmage, when he was not only the guardian of Azeroth, but also its most eligible bachelor.