"The Kirin Tor will tell you that mastering the magical arts is like learning the rules of a game. Fools. True power is taken by those brave enough to break boundaries. I am Medivh, the Last Guardian. If magic is a game, then it is one I play to win."[1]
For the collectible card, see

Medivh, the Guardian. For Medivh's other appearances, see Medivh (disambiguation). 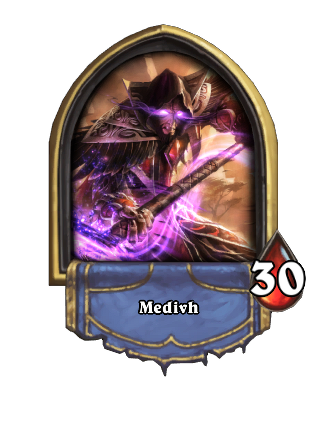 Medivh is a hero skin for the mage class.

Magus or Magna Medivh was the last Guardian of Tirisfal, an ancient line of protectors bestowed with great powers to do battle with the agents of the Burning Legion. He was corrupted even before birth, and possessed by the spirit of the demonlord Sargeras who used Medivh in his plan to conquer Azeroth. Medivh contacted the orcish warlock,

Gul'dan, and together they opened the Dark Portal, which allowed the Burning Legion to begin its destruction of Azeroth. He was slain shortly after by a party led by one of his friends,

Shortly before the beginning of the Third War, Medivh returned as a mysterious prophet, manipulating events in order to arrange the formation of a last-ditch alliance between the mortal races on Kalimdor, guiding them to victory at the Battle of Mount Hyjal. The prophet's name means "keeper of secrets" in Thalassian. He possessed Atiesh, Greatstaff of the Guardian which is currently wielded by his apprentice, Khadgar.

Medivh is currently available for obtaining. 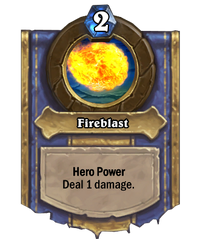 Once unlocked and selected for use, Medivh replaces Jaina Proudmoore whenever the player uses a Mage deck, as well as:

When viewed in the Collection, Medivh has the following flavor text:

The Guardian of Tirisfal is a force for good. Demonic possession is a manageable condition. <color=red>Includes a card back!</color>