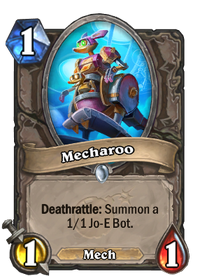 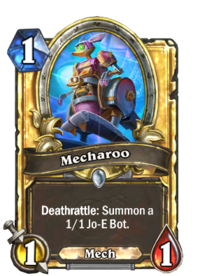 Its project name was KAN-GA. The little one was R-00.

Mecharoo is a common neutral minion card, from The Boomsday Project set.

Mecharoo can be obtained through The Boomsday Project card packs, or through crafting. 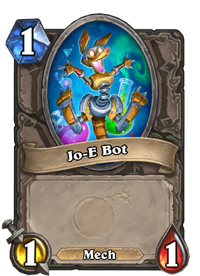 Mecharoo is essentially a neutral Possessed Villager with the added bonus of being a Mech and summoning one. As a cheap, sticky mech, Mecharoo is a good fit in most aggressive decks using Magnetic minions. It also has a Deathrattle for cards like Fireworks Tech.

Mecharoo has some notable anti-synergy with Kangor's Endless Army, as it's hard to guarantee both the Mecharoo and Jo-E Bot have Magnetic upgrades, risking resurrecting a 1/1 Mech.