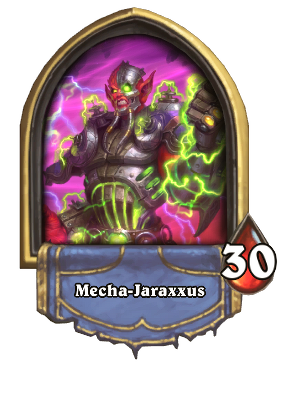 For the boss in Trial by Felfire Story, see Mecha-Jaraxxus (boss).

Mecha-Jaraxxus is an alternate hero for the

Mecha-Jaraxxus represents a version of the man'ari eredar Lord Jaraxxus that has been rebuilt by Dr. Boom for unclear purposes. This version of the eredar lord is unique to Hearthstone.

In Ashes of Outland, Mecha-Jaraxxus is the leader of a new organization called the Rusted Legion and the main antagonist of the Solo Adventure Trial by Felfire. Supposedly, Mecha-Jaraxxus is a failed experiment that Dr. Boom never bothered decommissioning and was left to his own to assimilate every living being in Outland into destructive machines.

As of June 4th 2021 Mecha-Jaraxxus is temporary available in game shop for $14.99. Unlike other re-released skin, there is no gold price for this bundle.

Mecha-Jaraxxus was only obtainable through pre-purchasing The Boomsday Project Mega Bundle, which is only purchasable with real money.[1]

Once unlocked and selected for use, Mecha-Jaraxxus is used as the hero whenever playing with a warlock deck. Mecha-Jaraxxus comes with his own portrait, emotes, and hero tray art, as well as featuring a special animation when using his Hero Power, Life Tap.

When viewed in the Collection, Mecha-Jaraxxus has the following flavor text:

Dr. Boom rebuilt Jaraxxus with unbelievable puzzle-solving skills, but he still wins most games through intimidation.

One of the The Boomsday Project bundles unlocks the following card back.