Edit
watch 02:52
Roblox: DeepWoken - The Loop
Do you like this video?
Play Sound
Mecha'thun
Regular 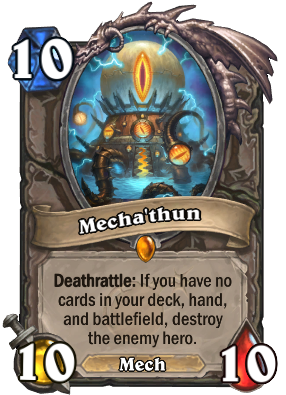 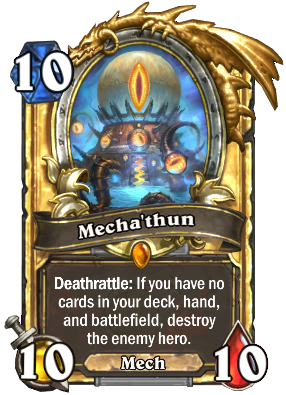 Deathrattle: If you have no cards in your deck, hand, and battlefield, destroy the enemy hero.
Flavor text

"Your software will fail. Your users will abandon you. You are already obsolete."

Mecha'thun is a legendary neutral minion card, from The Boomsday Project set.

Mecha'thun can be obtained through The Boomsday Project card packs, or through crafting.

Mecha'thun offers one of the few guaranteed win conditions in the game, but its requirements are very demanding. Not only is drawing out your entire deck a time-consuming process, emptying out your hand and clearing out all other friendly minions is just as tricky. Otherwise, as a vanilla 10/10 it's largely useless.

If you play Mecha'thun with no assistance, there is no guarantee it will survive to the next turn to combo it to meet the requirements. Even if you filled all the requirements, there's always a chance it could get silenced or transformed on the opponent's turn, negating all your hard work. One-turn combos are still possible however by summoning it through alternative means or using Galvanizers to reduce its cost to be more manageable.

Hemet, Jungle Hunter can delete your low-cost cards out of your deck to empty your deck as soon as possible. Keening Banshee also helps with deck thinning.