This article is using {{Card template}}.
See Help:Style guide/Card for how to edit this kind of article.
Edit this article
Meanstreet Marshal
40577 • CFM_759
Regular 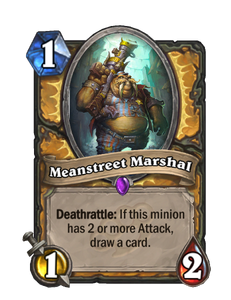 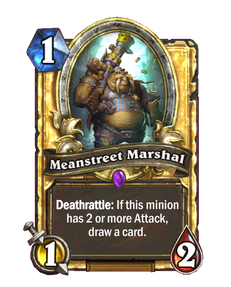 Remember, submit your bribes directly to the Marshal - it's the law! 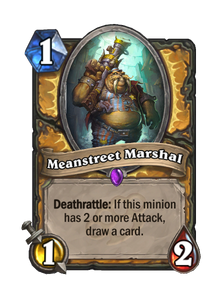 Meanstreet Marshal is an epic paladin minion card, from the Mean Streets of Gadgetzan set.

This minion is an extremely cheap source of card draw with the downside of requiring a buff to be used. As such, it makes for a poor turn 1 play. It can be easily comboed with Grimestreet Outfitter or Grimestreet Enforcer for all but guaranteed card draw. It can also be buffed up with cards like Blessing of Might after it's been played. However, unless you buff the Marshal immediately after playing it, you risk your opponent removing it before your next turn, thus negating the deathrattle.

Summon
You gonna sleep with the fishes.