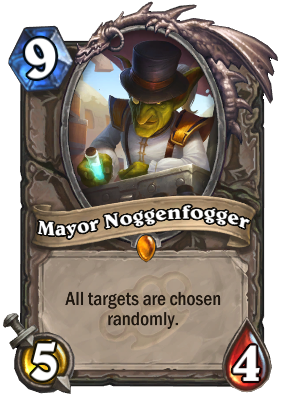 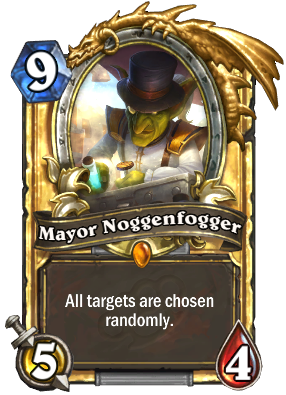 This flavor text was randomly generated. If it happens to form words and make sense, that is purely by chance.

Mayor Noggenfogger is a legendary neutral minion card, from the Mean Streets of Gadgetzan set.

Mayor Noggenfogger can be obtained through Mean Streets of Gadgetzan card packs, or through crafting.

Mayor Noggenfogger's card effect is extremely chaotic and is best used as a last-resorts defense, similar to Mogor the Ogre, but applying to more than just minions.

If you were able to build a board with low-cost minions before playing Noggenfogger, it can cause whatever thrown towards you to hit an unfavorable minion instead, giving you some time to buy against any non-AoE effects. Even with fewer minions, there's always a chance an enemy minion or spell will hit something other than your face, buying you a bit of time. Inversely, an opponent with a bigger board can end up targeting a damaging spell like Fireball on their minion instead.

Noggenfogger can deter a lot of effects by simply being on the board. He deters heroes from attacking, since there's always a chance they'll hit something they don't want and waste Health and/or weapon durability. He also deters targeted buffs since they may end up buffing the wrong minion, and he especially deters healing and effects that can damage any character, and Noggenfogger may end up healing a healthy minion or hitting their own hero's face.

While Noggenfogger's effect also applies to you, unlike Yogg-Saron, you have some way to work around his effect. Noggenfogger will never redirect to an invalid target, so the fewer minions the enemy has, the less likely you are to hit the wrong target. As mentioned earlier, AoE effects are unaffected by Noggenfogger.

Unfortunately, Mayor Noggenfogger has more negatives than positives. For one, he's extremely overpriced: a 9-Mana with the stats of a 4-Mana minion. Not only is playing him a significant tempo loss, his absurdly high mana cost makes it unable to combo into anything you could actually take advantage of. He also won't protect you from AoE effects like Flamestrike - which also happens to kill Noggenfogger - or anything that targets enemy heroes only, so it won't work against a Steady Shot or a Malygos-empowered Sinister Strike. And of course, because his effect is so random there's always a chance he can always end up backfiring.

Overall, Mayor Noggenfogger is a purely "for-fun" RNG legendary that is best played if you have nothing to lose.

The esteemed goblin mayor of Gadgetzan, Noggenfogger only wants what's best for the bustling, prosperous city. Or so he claims. As he's interviewed by the persistent Dora R from the Gadgetzan Gazette, it becomes clear that he's very hesitant to acknowledge the rampant levels of crime in his city, more focused on glossing it over for the sake of attracting tourists and business prospects. He is implied to be in bed with the Grimy Goons, due his having Knuckles under his employ as well as owning the contracting firm that built the First Bank of Gadgetzan, which was quickly acquired by Don Han'Cho and the Goons. That said, he seems utterly oblivious to the plots of the Jade Lotus within the Museum or the Kabal at the Mega Mart, though he is looking into rumors of 'dragon people' infiltrating Gadgetzan.

Marin Noggenfogger is the creator of the famous Noggenfogger Elixir and, ever since the the Cataclysm, the baron of the goblin city of Gadgetzan in Tanaris. He is married to Sprinkle, whom he previously considered a mere friend.