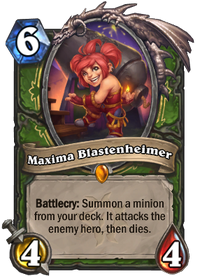 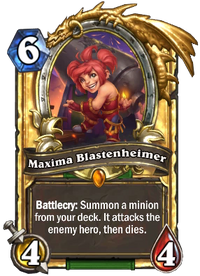 Battlecry: Summon a minion from your deck. It attacks the enemy hero, then dies.

Believe it or not, this is only the faire's fourth most dangerous game.

Maxima Blastenheimer is a legendary hunter minion card, from the Madness at the Darkmoon Faire set.

Maxima Blastenheimer can be obtained through Madness at the Darkmoon Faire card packs, through crafting, or as an Arena reward.

Maxima's Battlecry is reminiscent of Flark's Boom-Zooka, except that the minion summoned from the deck goes directly for the enemy hero. The same principle applies here, however: She is best used in a deck with Deathrattle synergies, and minions played solely for their Deathrattle effects, such as Savannah Highmane, Sylvanas Windrunner, Darkmoon Tonk.

To maximise the benefit from her Battlecry, strong minions with high base Attack and/or powerful Deathrattle effects are most desirable here (such as the three minions mentioned above). But as with any minion with strong Battlecry effects, effects that summon them directly to the battlefield undermine their potential (eg. Deathlord, Dirty Rat, Hecklebot, etc.). In addition, be EXTRA careful of the enemy Secrets that can make Maxima's Battlecry backfire (prime suspects namely Vaporize, Misdirection and Shadow Clone).

There is 1 achievement related to Maxima Blastenheimer.