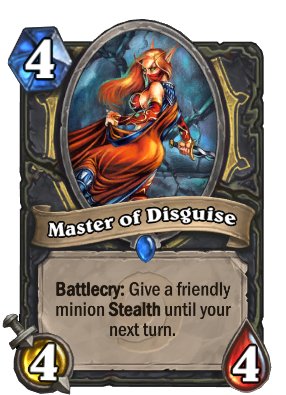 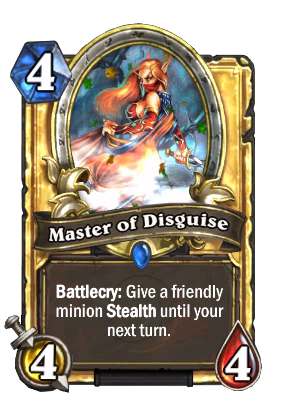 Battlecry: Give a friendly minion Stealth until your next turn.
Flavor text

She's actually a male tauren. People don't call him "Master of Disguise" for nothing.

Master of Disguise is a rare rogue minion card, inducted into the Legacy set, formerly from the Classic set. 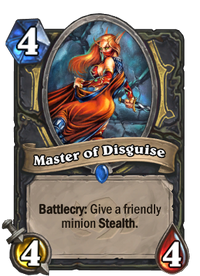 Master of Disguise can be obtained through Classic card packs, or through crafting.

The Stealth granted by this card has a wide variety of uses. It can be used after another friendly minion attacks, preventing your opponent from removing it from the board with spells. In particular, cards with high Attack but low Health can benefit a lot from Stealth, being able to choose when to attack.

Note that minions who deal damage from effects other than attacking will still lose Stealth, for example Knife Juggler.

Until Whispers of the Old Gods, the Stealth granted by Master of Disguise's Battlecry was not temporary, but regular Stealth, potentially allowing the target minion to stay Stealthed indefinitely. While the card had never been a popular one in the meta, Master of Disguise frequently limited design possibilities for other cards due to the combo potential of its Stealth effect. Brode remarked, "If you only knew how many cards get killed because of that one card..."[4] Other cards were forced to change in order to avoid enabling dangerous synergies, such as Animated Armor, which was originally a neutral card, but was "NO FUN with Master of Disguise".[4] This was eventually changed with a number of other card changes accompanying the release of game formats, designed to create a fresher meta and increase design space for future cards.