This article is using {{Card template}}.
See Help:Style guide/Card for how to edit this kind of article.
Edit this article
Mass Hysteria
50071 • TRL_258
Regular 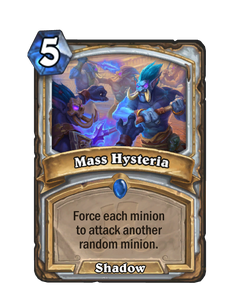 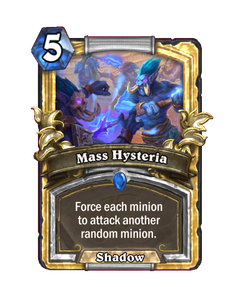 Black Friday gets worse every year. 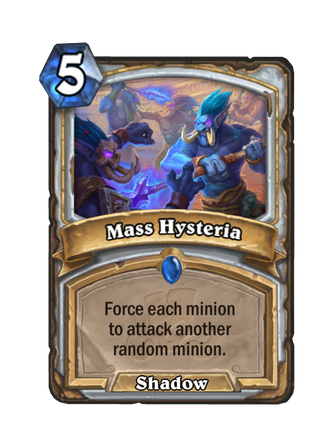 Mass Hysteria is a rare priest spell card, from the Rastakhan's Rumble set.

Mass Hysteria is often best used when there are no minions on the priest's side of the board, making it a decent board clear. It can also be used after having your minions attack the enemy hero, allowing your minions to attack twice in a turn.

It is hard to tell the result of Mass Hysteria when there are many minions with different stats, especially how to raise the probability to clear the board. But below are a few easy ones.

Mass Hysteria often works as an excellent board clear against Aggro decks.

Violet Wurm before the turn playing Mass Hysteria, which can almost destroy all minions while maintaining deathrattles. Also, Deathrattle minions can be played to counter this.

As friendly Overkills can trigger during Mass Hysteria, this combos well with

Linecracker played last turn, being able to get an extremely high attack.

Mass Hysteria shares its name, though none of its functionality, with Mass Hysteria, an artifact trait available to Shadow priests wielding the artifact weapon Xal'atath, Blade of the Black Empire during World of Warcraft: Legion. Mass Hysteria caused the priest to gain a stacking buff that increased the damage dealt by their

Shadow Word: Pain and Vampiric Touch spells as long as they remained in

Voidform. As with all artifact traits, Mass Hysteria was removed when artifact weapons became deprecated in Battle for Azeroth.