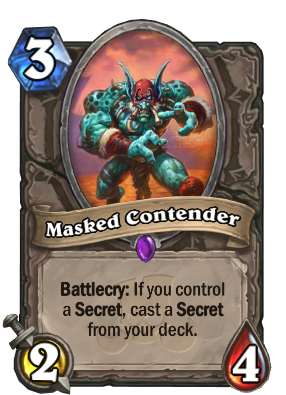 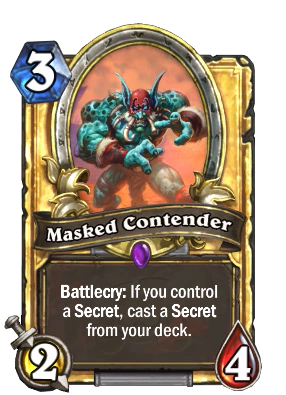 Battlecry: If you control a Secret, cast a Secret from your deck.
Flavor text

Masked Contender is an epic neutral minion card, from the Rastakhan's Rumble set.

Masked Contender can be obtained through Rastakhan's Rumble card packs, or through crafting.

Masked Contender is very value-efficient in decks that run multiple Secrets, not only playing the Secret, but pulling one from your deck as well, although not as grossly efficient as Mad Scientist. Playing a Secret that isn't too easy to trigger like Rat Trap earlier works best to get Masked Contender out early. Other Secrets like Venomstrike Trap and Ice Barrier can also be used as long as you have a predictive grasp on the board situation.

Masked Contender appears to be a dire troll.