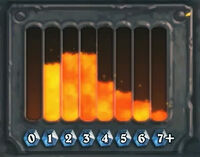 Example of a deck's mana curve display from the Arena screen

In Hearthstone, mana is a progressive resource that increases with each turn. The limited but slowly-increasing supply of mana serves to delay and add pace to the game, preventing players from simply playing their most powerful cards on round one. It also splits the game into distinct phases, with higher-value cards only becoming playable in later rounds.

As one of the key limiting resources in the game, effective mana management is essential for achieving victory in Hearthstone. While generally it is ideal to make use of all available mana each turn to maintain tempo, in practice it is sometimes wiser to hold back cards until the right time, especially if planning a combo. While this may lead to mana being 'wasted', taking a more cautious approach to card playing can win games. Hero Powers, while intentionally mana-inefficient, may be helpful for making use of mana every turn without consuming cards.

The mana cost of a card determines which round it will become available to play, as well as which cards it can be used in combination with. This concept is used in deck building to ensure viable options each turn, and can also be used to predict which cards may be played on certain rounds, such as Mind Control generally only becoming playable from round 10 onwards.

Good early-game minions are typically most powerful when played on the earliest turn possible for their mana cost — or even a turn earlier using The Coin. Playing, for example, a 3-mana minion on turn 3 is known as playing it "on curve". Playing on curve each round typically produces a very strong presence on the board and is a key strategy for many aggro and tempo decks, chiefly since these seek to optimise advantage during the early and mid-game. In contrast, many control decks (and some combo decks) pay little attention to playing on curve, being more interested in surviving until they can draw the right cards. However, the mana curve is still one of the main limiting factors dictating the point at which such decks are able to set about achieving their win conditions. The mana curve also determines the pace of the opponent's actions, making it impactful for any deck.

This relates to the larger early game ideal of using all available mana each turn, maximising the player's output. However, it is not always possible to find desirable options that precisely fit the player's mana pool each turn, especially in decks including many higher-cost cards. Hero Powers can be used to spend any spare mana, but typically provide a lower-value alternative to a card of the same cost. Decks which revolve around early-game board domination usually falter if they are unable to play their minions on curve, or at least spend all of their mana each turn.

Cards like The Coin and Innervate can allow cards to be played ahead of the curve, sometimes several turns earlier than they are normally available, usually providing a strong advantage. Effects such as Wild Growth and Nourish can similarly accelerate the player's progress toward maximum mana more permanently, allowing them to play expensive cards earlier, while effects like Alarm-o-Bot and Barnes can allow individual minions to enter play several turns earlier than usual.

Many warlock Demon minions come with drawbacks that serve as a trade-off for their lower mana cost, such as Felstalker or Flame Imp. This makes them especially effective when played on curve, since they can allow the player to put powerful minions on the board earlier than would normally be possible. However, when played in the late game the mana cost is usually of little significance, meaning these cards' drawbacks can make them more trouble than they're worth. As such these cards often best fit aggressive decks, with an emphasis on playing minions on curve for the first few turns of the game.

The mana curve is a basic deck-building concept that helps the player get as many cards onto the battlefield as soon as possible. By default, each player gets the same amount of mana to spend on the cards they draw, with each turn giving each player an opportunity to use that much mana. To take advantage of this, a player needs cards in their hand that match the amount of mana available. The more cards a deck has of any given cost, the earlier they will on average be drawn into the player's hand. As the game begins, there is less mana, and the player needs lower-cost cards, but few cards have been drawn so far, so the deck should have more of them. In later turns, there is more mana, the player wants cards with a higher cost, but has now drawn several times from the deck, so there is no need to have so many of them. Therefore, in general, the number of cards a deck has of each mana cost should have a few high-cost cards and then more and more cards of a lower cost following a smooth curve.

The mana curve of a Zoolock deck, as seen in the collection manager

The mana curve needs to be adjusted for factors such as:

The desired mana curve of a deck also strongly varies by deck type or overall pacing. An aggro deck may contain only cards costing between 0 and 3 mana, while a control deck may contain many cards costing 7 or more. Midrange decks' focus on optimising tempo each turn means they typically contain a range of card costs, ensuring they always have an ideal option. While aggro decks often aim to play multiple cards each turn, making it unnecessary to include more expensive cards, midrange decks aim to win in the mid-game, requiring the inclusion of some higher-cost cards.

The significance of the mana curve is increased in the Arena, where the player is not able to choose their cards as specifically as in constructed play. The random selections provided when building an Arena deck make it important to bear the mana curve in mind. A common strategy is to build the first half of the deck based on the quality or value of the options presented; and then to build the second half based on what is still needed or missing from the deck. In terms of the mana curve, this often means ensuring that the deck has sufficient cards of each cost, even if it that means choosing cards of lower overall quality: a deck composed only of high-value, high-cost cards is likely to fail, due to the lack of options during the early and mid-game.