This article is using {{Card template}}.
See Help:Style guide/Card for how to edit this kind of article.
Edit this article
Mana Wyrm
405 • NEW1_012
Regular 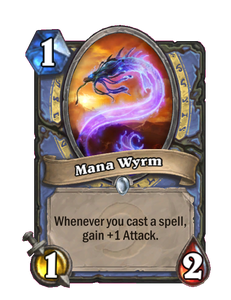 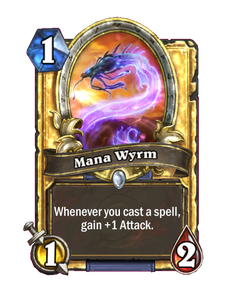 These wyrms feed on arcane energies, and while they are generally considered a nuisance rather than a real threat, you really shouldn't leave them alone with a bucket of mana. 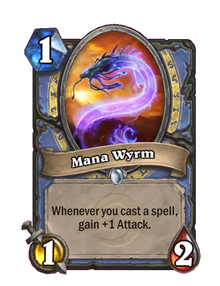 Mana Wyrm is a common mage minion, inducted into the Legacy set, formerly from the Classic set. 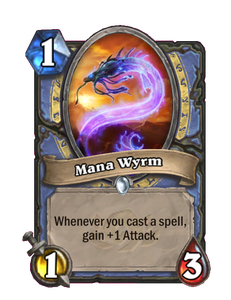 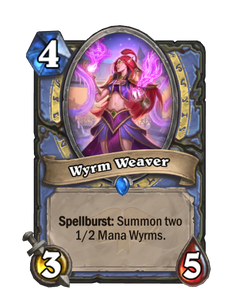 Mana Wyrm is a fairly weak 2-cost minion that gains Attack for each spells cast. Mana Wyrm works best in Mage decks that run multiple cheap spells to take advantage of its effect early. If not dealt with, the amount of damage it deals over time can add up significantly.

Note that The Coin counts as a spell, which means its Attack will get buffed by it. With The Coin and a 1-mana spell, it will instantly turn into a 3/3.

Mana wyrms are floating, serpentine creatures found in the blood elven lands and some Outland zones such as Netherstorm.

They are attracted to and feed off arcane energies, and so have been seen in Quel'Thalas and most likely other worlds throughout the Great Dark Beyond. They are generally considered more of a nuisance than a real threat, but in large numbers they can be very deadly to magical creatures and magic-users.

According to the quest "Reclaiming Sunstrider Isle", the mana wyrms on Sunstrider Isle were guardians of the Burning Crystals, that have long been used to power the isle's experimentations, but the Scourge invasion of Quel'Thalas has driven them errant from the blood elves' magical control over them.

More powerful mana wyrms have been seen in service to the Sunreavers, helping to guard the Dawnseeker Promontory on the Isle of Thunder. These mana wyrms specialize in shutting down and slaying enemy spellcasters, their small size often leading such victims to underestimate their power.

The Red Mana Wyrm appears to be a Mana Wyrm that has fed on the corrupted red mana created by the Kabal, one of the three main crime families controlling the mean streets of Gadgetzan.