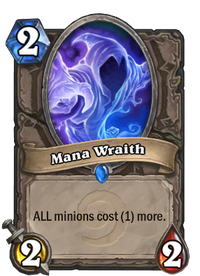 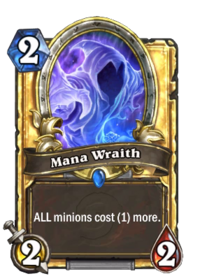 They come out at night to eat leftover mana crystals. "Mmmmmm," they say.

Mana Wraith is a rare neutral minion card, from the Classic set.

Mana Wraith requires a lot of deep in-game knowledge and the right deck to be used with great success. You need to use it right before opponent is expected to play a minion, for example right before your opponent's Sen'jin Shieldmasta when you have a lot of 1-3 HP minions on turn 4, or to prevent that Deathwing from wiping the board.

Mana Wraith along with Emerald Hive Queen are great additions for an "almost no minion deck". Lost in the Jungle is an options to bypass their effects while hindering your enemy summons.

Mana Wraiths are a type of elemental based on mana, itself a form of arcane energy.