This article is using {{Card template}}.
See Help:Style guide/Card for how to edit this kind of article.
Edit this article
Mana Tide Totem
513 • EX1_575
Regular 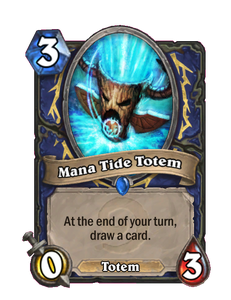 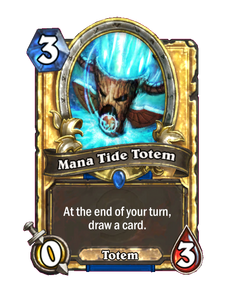 It is said that some shaman can say "Floatin' totem" 10 times, fast. 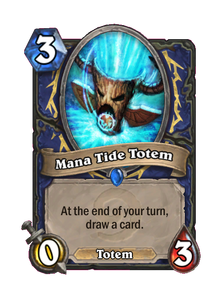 Mana Tide Totem is a rare shaman minion card, inducted into the Legacy set, formerly from the Classic set. 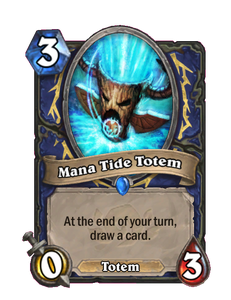 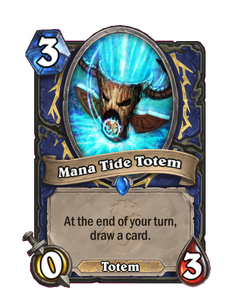 Mana Tide Totem (Core) is uncraftable and cannot be crafted or disenchanted.

The Mana Tide Totem is an extremely powerful tool for gaining card advantage, and can quickly earn the shaman a substantial lead if allowed to survive for a few turns. It should ideally be protected by creatures with Taunt or placed with higher priority targets in order to increase its likelihood of surviving.

Because Mana Tide Totem activates at the end of the player's turn, it is guaranteed to replace itself with at least one other card before it can be removed (unless by a Secret such as Snipe). It can therefore be considered a highly efficient and fairly reliable card; if the opponent immediately plays a removal spell to destroy the totem, the shaman will still have gained card advantage. If the totem is allowed to survive longer, its efficiency becomes even greater. However, the totem's zero Attack and reasonably low Health makes it vulnerable to efficient minion removal if not protected by a Taunt.

As a source of potentially multiple card draw, Mana Tide Totem has a high soft taunt status, meaning opponents will want to remove the totem as quickly as possible. It is often worth suffering a fair amount of hero damage or loss of minions in order to ensure that the totem is removed before the shaman can gain an unbeatable card advantage; the question is how long the shaman can keep it alive before it is neutralised, and the net card advantage the shaman can gain from playing it. Forcing the opponent to trade several cards in order to remove it, or to wait a few turns before they are able to, all provide the shaman with advantage, making the totem a very card-efficient play. To this end, Totemic Reflection is powerful when applied to Mana Tide Totem, forcing opponents to commit even more resources, including taking damage from the totem itself, to deny the shaman's card draw.

Be careful if your deck has other means of drawing cards, as the Mana Tide Totem will attempt to draw a card each turn, even if it results in Fatigue damage or burning cards due to already having a full hand.

Mana Tide Totem is a shaman Water totem that increases Spirit for nearby allies for a few seconds, restoring mana to friendly healers. A healer's mana in World of Warcraft is similar in many ways to a player's supply of cards in Hearthstone, limiting their available options and threatening a dangerous drought if their supply is expended too quickly. In both cases, Mana Tide Totem helps to restock the player's store.