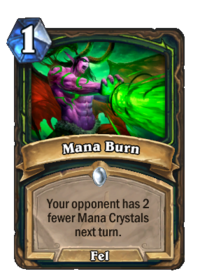 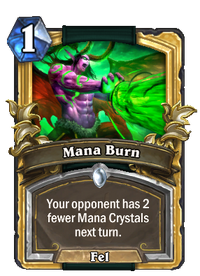 Your opponent has 2 fewer Mana Crystals next turn.

One way to ensure they are not prepared.

Two copies of regular Mana Burn are obtained after unlocking Demon Hunter class. They cannot be crafted or disenchanted.

Mana Burn is a powerful card that can win you the game. Its powerful disruption can be very significant early on, for example, playing Battlefiend + Twin Slice on Turn 1, and if the opponent cannot deal with it, you can Mana Burn + Demon Claws to disable your opponent, rendering them unable to do anything as they have no mana, and leaving a dangerous 3/2 minion that can deal a lot of damage.

Alternatively, it can be used when you know that your opponent is about to use an impactful card or combo, such as an OTK or a strong board (like through Exotic Mountseller) However, if predicted wrongly, this could go to waste.

Mana Burn was one of the Demon Hunter's abilities in Warcraft III. It fired a blast of fel magic at an enemy, draining their mana and damaging them based on the amount drained. It appeared in World of Warcraft as a Priest ability, but was removed in Mists of Pandaria.