This article is using {{Card template}}.
See Help:Style guide/Card for how to edit this kind of article.
Edit this article
Malygos, Aspect of Magic
56161 • DRG_270
Regular 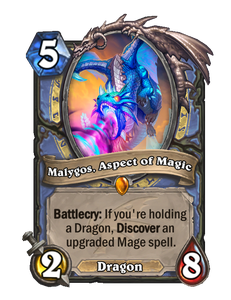 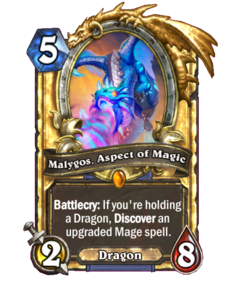 It's official. We can say Malygeese. 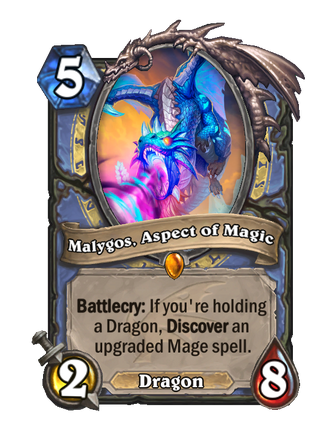 For the Classic version of Malygos, see

Malygos, Aspect of Magic is a legendary mage minion card, from the Descent of Dragons set.

These are the upgraded forms of 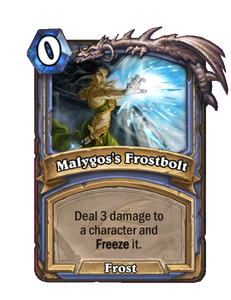 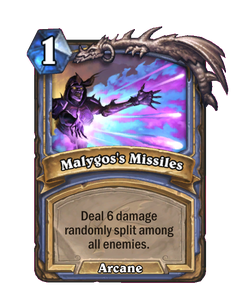 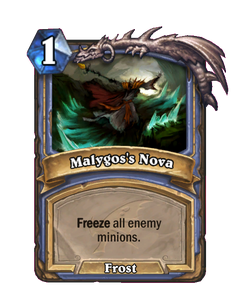 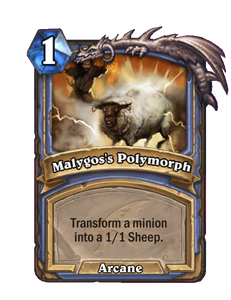 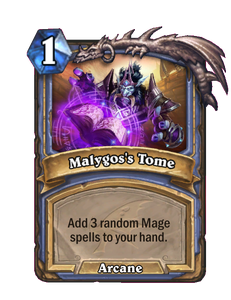 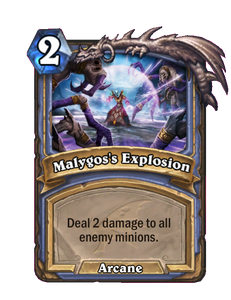 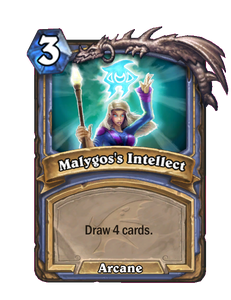 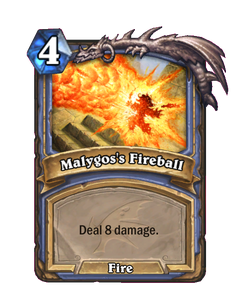 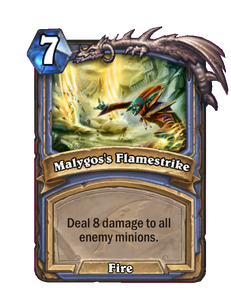 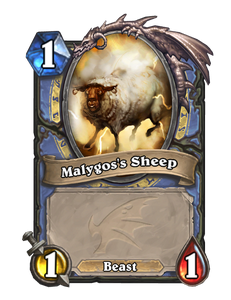 Malygos, Aspect of Magic is similar to Zephrys, in the sense that you don't choose it for 1 specific card. Selecting Frostbolt for single target removal is hence cheaper, whilst Missiles and Fireball is more effective. For board clear, Explosion and Flamestrike are doubly effective. Intellect and Tome are cards to add to your hand. Nova can be chosen if you really need stalling. It is always a good card to have if you are running multiple dragons in Mage.

It is highly NOT recommended to build your deck over these upgraded spells, as it is highly inconsistent that you will get a single one of them. Additionally, it can't be cast or otherwise effected from cards such as

Tortollan Pilgrim. Instead, just use this card you need board clear, removal or more hand cards, or even stalling.

Despite the above point, it can be noted that freezing all enemy minions from Malygos's Nova means that you can set up with 9 mana instead of 7 (from a regular

Frost Nova), for example, with this card's base form,

Summon
You mortals know nothing of magic!
Attack
So be it!

Malygos the Spellweaver was the Leader and Aspect of the blue dragonflight One of the five Dragon Aspects and one of the most ancient creatures living on Azeroth and the eldest of the Aspects. Norgannon, the titan master-magician and keeper of lore, granted Malygos a portion of his vast power. From then on, Malygos would be known as the Spell-weaver, the guardian of arcane magic and hidden arcanum.

Malygos, the Aspect of Magic and leader of the blue dragonflight, began a terrible war to purge the world of "rogue" magic users, including the Kirin Tor of Dalaran. Realizing the situation had grown out of hand,

Alexstrasza rallied the remaining dragonflights in the Wyrmrest Accord to combat Malygos' genocidal crusade. After much conflict around the Nexus, heroes entered Malygos' inner sanctum with the aid of the red dragonflight and defeated him, ending the war and depriving magic of its appointed guardian at a crucial turning point.

Like the other Aspects, Malygos first appeared as a legendary minion in Classic.