This article is using {{Card template}}.
See Help:Style guide/Card for how to edit this kind of article.
Edit this article
Malygos
436 • EX1_563
Regular 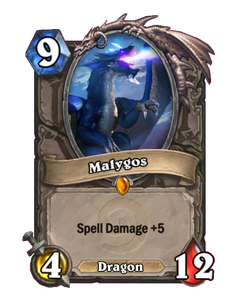 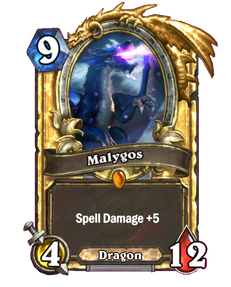 Malygos hates it when mortals use magic. He gets so mad!

For the Descent of Dragons version of Malygos, see Malygos, Aspect of Magic.

Malygos is a legendary neutral minion card, inducted into the Legacy set, formerly from the Classic set. 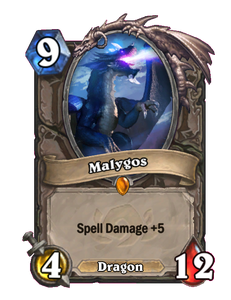 Malygos has one main goal: Spell Damage. Malygos gives 5 Spell Damage, which is the most any single card currently gives. This makes a spell like Fireball deal 11 damage for 4 mana. You would usually play him in a deck with lots of cheap damaging spells. In this type of deck, he would act as a win condition since your spells in hand should be able to do over 30 damage.

Because Malygos costs 9 mana, you will probably not be able to utilise his ability until your next turn. Even with 12 health, he is still vulnerable to hard removal such as Hex. As such, some way of protecting Malygos is often very useful.

The most effective way to put Malygos' ability to good use is to setup a combo that lets you put Malygos on the board - often multiples of him - while having enough mana for cheap spells. Emperor Thaurissan is excellent in this role as he not only lowers the cost of Malygos, he also reduces the cost of the spells you want to play with him. Cards that can copy Malygos like Faceless Manipulator or Prince Taldaram can be used to create an even bigger boost to Spell Damage. Many decks have been created to exploit Malygos' power, with Druid, Rogue, and Shaman being the most common classes to utilize Malygos combo decks.

Druids have many ways of both exponentially lowering the cost of Malygos or regaining their mana while also efficiently copying him. Dreampetal Florist, Aviana with Kun the Forgotten King, and even Jungle Giants and Twig of the World Tree gives them much more mana to work with after playing Malygos, while Ixlid, Fungal Lord, Gloop Sprayer, or Flobbidinous Floop copies Malygos. Druids can then play Moonfire for free for direct burst, as well as Swipe and Living Roots for extra burst.

Rogues have access to many cheap spells such as Sinister Strike, Eviscerate, or Razorpetal Volley, perfect for discounting with Emperor Thaurissan. While they can also create cheap 1/1 copies of Malygos with Shadowcaster and Sonya Shadowdancer, the most controllable method is to use Kobold Illusionist with Necrium Blade. Alternatively, they can use a Wondrous Wand or Galakrond, the Nightmare to draw a 0-cost Malygos from their deck, a feat made easier by shuffling in more copies of Malygos like Togwaggle's Scheme. You can also play Malygos on its own then Conceal it, but any non-targeted hard removal will ruin your combo.

Some Shaman spells can summon a Malygos at a much lower cost, namely Ancestor's Call and Eureka!, which can then be followed up with cheap direct damage spells such as Lightning Bolt, Frost Shock, and Totemic Smash.

Finally, as a dragon that is usually kept in hand until the end of the game, it can activate cards like Blackwing Technician or Firetree Witchdoctor.

If your opponent plays Malygos and still has cards in hand, you should usually assume that your opponent will be able to kill you next turn if you don't deal with it. (The only case this isn't true is if you know what cards your opponent can have and know it's not enough.) As such, getting rid of Malygos should be a top priority. Hard removal is best if you have some. Silence will usually prevent immediate death, though it has the problem of leaving a 4/12 body on the board. Killing your own Sylvanas Windrunner is a very good way of getting around a Conceal or other source of Stealth. Finally, playing Loatheb is a good response to Malygos as it will usually prevent the opponent from playing the spells they need to win the game.

Summon
I am the essence of magic!
Attack
You are finished!

Malygos was the Leader King and Aspect of the blue dragonflight One of the five Dragon Aspects Aspect of Magic and one of the most ancient creatures living on Azeroth and the eldest of the Aspects. Norgannon, the titan master-magician and keeper of lore, granted Malygos a portion of his vast power. From then on, Malygos would be known as the Spell-weaver, the guardian of arcane magic and hidden arcanum.

Malygos, the Aspect of Magic and leader king and aspect of the blue dragonflight, began a terrible war to purge the world of "rogue" magic users, including the Kirin Tor of Dalaran. Realizing the situation had grown out of hand, Alexstrasza rallied the remaining dragonflights in the Wyrmrest Accord to combat Malygos' genocidal crusade. After much conflict around the Nexus, heroes entered Malygos' inner sanctum with the aid of the red dragonflight and defeated him, ending the war and depriving magic of its appointed guardian at a crucial turning point.

Malygos reappears in Descent of Dragons as Malygos, Aspect of Magic.