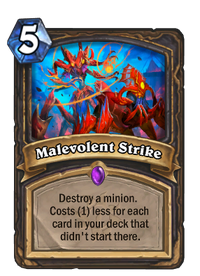 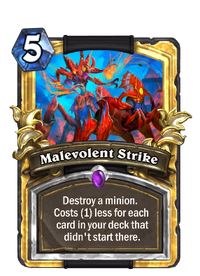 Destroy a minion. Costs (1) less for each card in your deck that didn't start there.

"I don't know how those got in there, but I'm blaming you two."

Malevolent Strike is an epic rogue spell card, from the Madness at the Darkmoon Faire set.

This card is an Assassinate like effect, and as long as your deck is able to support its condition, it'll end up giving more value then Assassinate. Malevolent Strike works well with C'Thun, the Shattered, automatically reducing its cost to 1 at the start of the game. It also has synergy with cards like Gang Up, Lab Recruiter, and Togwaggle's Scheme, giving it some use as hard removal in Mill Rogue. In Wild, Thief Rogue can use this with Academic Espionage to shuffle a huge number of cards into their deck.